There’s a small but beautiful moment in new multiplayer games when one player’s discovery sweeps across a server, a tidal wave of excitement – like finding out what happens when you type ‘/dance’. That moment recently happened to me in free-to-play MMO Conqueror’s Blade when one player tapped ‘B’ and summoned a mount out of thin air.

This is an historical war sim that puts you into the sabaton (armoured booties) of a medieval warlord – tonally, it’s pretty serious. But then, suddenly, there are horses everywhere. Way too many horses. Like popcorn kernels, 30 to 40 horses are magicked into existence, players galloping around town in a maelstrom of hooves.

My entire time with Conqueror’s Blade is tinged with this sense of discovery. Sure, this is largely due to it still being in beta, and so many of the surprises are due to players genuinely seeing them for the first time. When it’s complete, however, developer Booming Games promises an MMO that’ll let you lead an army comprising ‘thousands of troops’ that you’ve corralled and trained yourself.

To get to that point you have to consider everything the leader of an army of such a magnitude would have to: developing economies, securing alliances with other players, and conquering territories across the game’s open world. As it states on the Conqueror’s Blade website, your ultimate goal is to become the powerful leader of the world’s greatest medieval civilisation. Well, the greatest online medieval civilisation, at least.

But you don’t have to worry about all that just yet. The November beta for Conqueror’s Blade focuses on the 15v15 player siege mode. In it, you’re either attacking or defending a fortress. Each player commands a cluster of loyal troops while siege weapons litter the battlefield for you to use against the enemy. 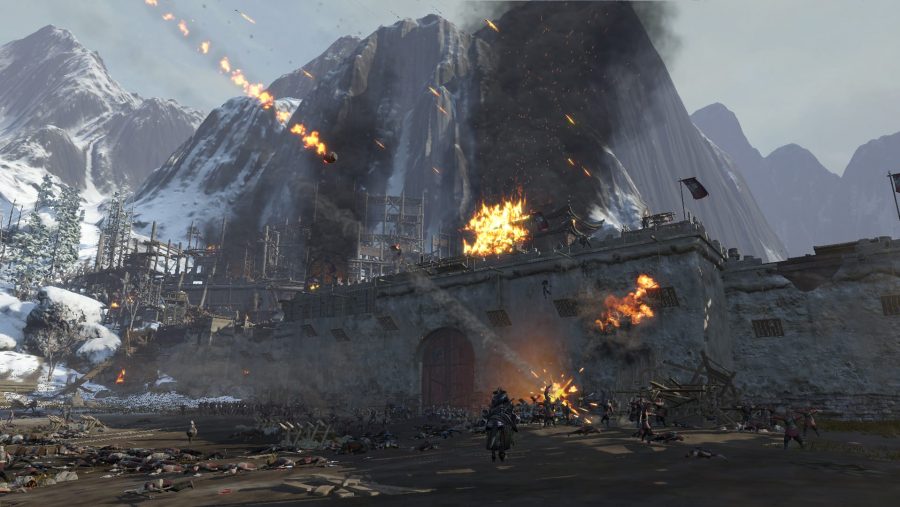 The layout of the siege battles are straightforward. The attacking team starts on the flat landscape in front of the fortress, equipped with siege towers, battering rams, and trebuchets to breach the fortress walls. The defending team has the advantage of height afforded by the castle walls that are lined with barricades and cannons. If you’re attacking, your aim is to breach the fortress and take over four tactical points. If you’re defending, it’s a little simpler, as there are only a few gaps to plug in the fortress, so you just have to keep an eye on those and survive until the opposition is destroyed or the timer runs out.

I load into my first siege expecting something along the lines of the Battle of the Black Water in Game of Thrones – a dramatic and epic sight. And sure enough, I’m struck by the sheer number of players and their troops – it’s quite the spectacle. I charge straight into the fray, running into huge groups of soldiers, slashing at them from atop my horse.

I could play more tactically, organising my troops into different formations and taking control of the various siege weapons, but embracing the chaos of the melee works out pretty well as I carve my way through a sea of AI soldiers. Some of the high-level players are barking orders in the chat box but they’re largely ignored. Commanding real people just isn’t as simple as AI. It’s not quite Game of Thrones but there’s fun to be had in all the mess. 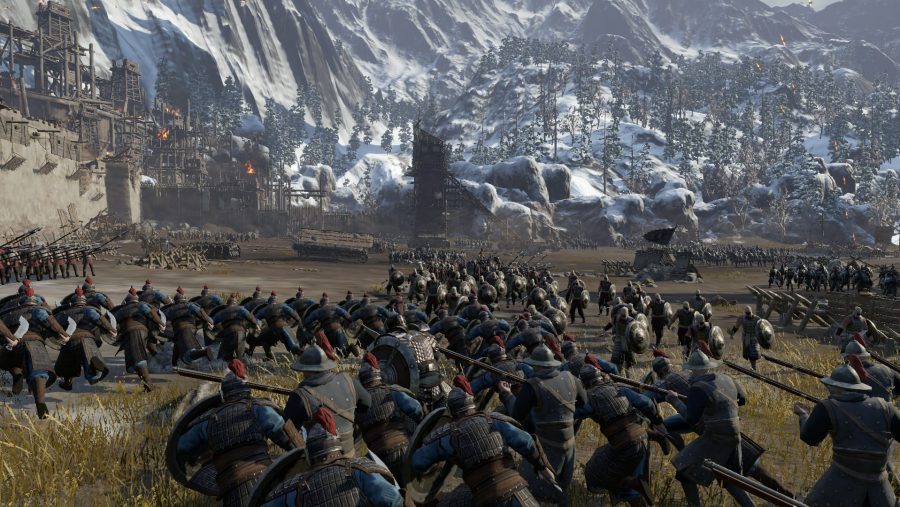 Most of the sieges I take part in quickly fall into a chaotic mess. But there’s one in which the tone of the battle shifts dramatically. Up until now, the siege battles I had participated in were set during the daytime with a bit of cloud overhead, not much going on. But this particular siege has loaded up and plunged me into darkness. Rain pelts down onto the field, making swords and armour shine. It feels like I’ve been transported to the battle for Helm’s Deep in The Lord of the Rings.

This time I’m defending a breached wall, trying to break the rush of attackers and their AI followers as the rain continuously falls on our heads. I’m part of a desperate band of defenders that have to repel an onslaught. Sure, defending is easier to coordinate than attacking, but there’s a real sense of struggle as you’re oppressed by wave after wave of soldiers charging in.

Much of what I play of Conqueror’s Blade is a contextless brawler. The town area feels flat and and the constant “Yes my Lord!” becomes strained when you hear it 20 times in one battle. But in that one moment, when the battle has you on the end of its spear, every part of the game making it feel cinematic, there’s something exciting in that I want to see more of in Conqueror’s Blade. Hopefully, as the game fills out with features, the wars will get the context they need, and the siege battles will have more of these epic moments.