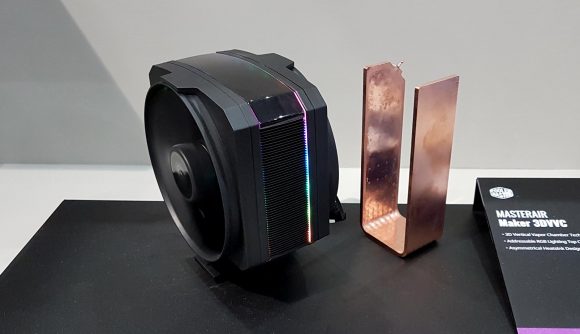 Cooler Master is taking what it has learned in the B2B business and applying it in the gaming sphere to build better coolers. While the cooling experts already offer the more-than-capable Wraith Ripper cooler with enough chilling potential to keep AMD’s Threadripper processors from combusting, it now reckons it can achieve the same thermal capability with far less surface area.

The MasterAir Maker 3DVVC is built using the company’s 3D Vertical Vapor Chamber technology. It’s a single u-shaped chamber set to replace the multiple heatpipes of current cooling designs. Individual heatpipes were previously necessitated to draw heat away from your CPU at full whack and redistribute it through the fins of the heatsink. However, the 3D Vertical Vapor Chamber technology merges these pipes into a single and more effective unit.

A Cooler Master representative tells me bending those heatpipes into that tower-friendly shape wasn’t an easy task, not without flattening the chambers inside anyways, but that it does have chip-chilling benefits over more traditional designs. For one, the new design equates to more cooling efficacy than the rather sizable, six heatpipe MA620M layout – akin to Wraith Ripper – despite its considerably sleeker size.

All that is kept cool by dual 140mm fans, which should result in lower RPMs and, in turn, quieter operation. This design features a similar, albeit slimmer, shroud to the Wraith Ripper, and the final design will supposedly incorporate a window into the U-shape heatpipe design and full RGB addressable lighting.

Something soggy: These are the best liquid coolers right now

And that all means slimmer, more capable coolers for air cooling aficionados. While the world looks towards liquid cooling solutions, there are still plenty of gamers rocking air coolers for their reliable, quiet, and cheap operation. I even made the swap back to air cooling from an all-in-one loop recently. No regrets. 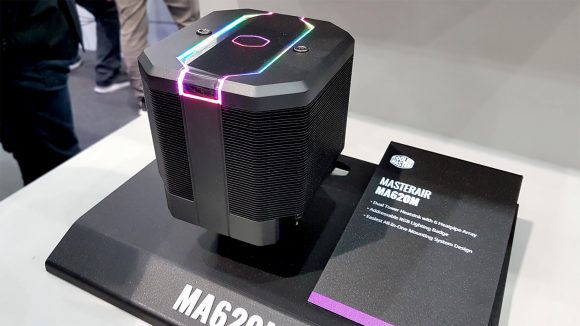 But for those of you that prefer the flashy styling of an AiO… first, you’re wrong, but second, Cooler Master has also announced a heap of new chip-chillers during last week’s show that may tickle your fancy.

One such design that caught my eye was the MasterLiquid Maker 240, which creates a stunning vortex to cool your components. Also, there’s the unreasonably huge MasterLiquid Dual Pump, which, as you may have guessed, comes equipped with two fully-equipped chambers for maximum cooling potential.