Chunky graphics card getting your PCIe slot down? Don’t fret, Cooler Master has just the thing. The ELV8 (geddit?) is a GPU brace unlike most others in that it’s equipped with addressable RGB lighting across a single strip along the length of the support. Neat.

Some graphics cards aren’t built with your poor motherboard in mind. Take the MSI Gaming X Trio, Zotac Amp! Extreme, Asus Strix, or basically any Colorful card ever built, for example. The sheer weight of all that cooling and 1337 gamer style is often far too great for your motherboard’s PCIe slot or GPU’s PCB – and too often even those reinforced with metal plating.

But rather than wave goodbye to these monster graphics cards that barely break a sweat under pressure, why not instead prop your GPU up with a bit of metal? In fact, why stop there. Why not have that piece of metal aglow with all the colours of the rainbow? That’s one thing your humble Lego tower isn’t capable of doing… actually it probably is nowadays.

But if you prefer to ditch the grassroots approach and instead buy your happiness, then maybe Cooler Master’s fresh-faced ELV8 GPU brace will do the trick. With adjustable vertical and horizontal support fit for most graphics cards, all you need is a spare expansion space below your GPU to save your slots. 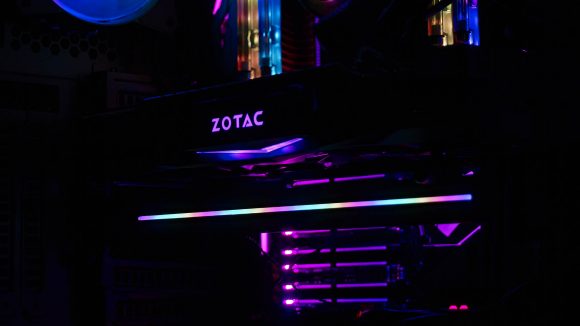 The RGB lighting is fully addressable via motherboard software or Cooler Master’s MasterPlus software (pending an RGB controller), and the whole kit has been designed alongside TantricModz to ensure it’s pleasing in form and function.

Sure to put some PC builders’ minds at ease with their shiny new tech, the ELV8 will set you back a rather reasonable £20. It’s available for pre-sale in the UK right now, with further availability expected shortly.