Update 14 Jul, 2016: Twitch have made a short blog post to point out that their own Terms of Service mean that any streamer using Steam’s API for gambling will be banned, some sites have already begun shutdown procedures.

Valve making a decision like shutting down the entire gambling sub-industry has naturally far-reaching implications. Twitch have issued their own statement on it and the various websites it affects have already begun to react.

Steam is a good place to try most of the stuff in our list of best PC games.

Twitch’s statement reminds users that “per Twitch’s Terms of Service, broadcasters are not permitted to stream content that breaks the terms of service or user agreements of third-parties.” This is why you don’t see streams of people cheating or hacking in online shooters, for example.

They go on to say that, therefore, “content in which the broadcaster uses or promotes services that violate Valve’s stated restrictions is prohibited on Twitch.” So, even though all the sites aren’t down yet, gambling on them on streams is banned effective immediately.

Meanwhile, CSGODouble is one of the first sites to react to the news. It now has a pop-up box, displayed below, explaining the situation to its users. 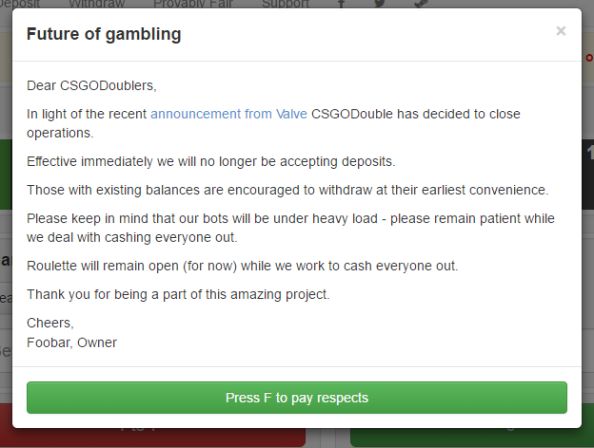 The owner has also stated publically, as caught by Reddit, that he will be going to whatever measures are necessary to make sure all his users get out what they’re owed. The worry amongst the community is that not every site will be able to do this and users may lose out.

Original story 13 Jul, 2016:Valve have finally released a statement about the third-party gambling sites that have been popping up around Steam, saying they have no business with them. Valve are going to start sending out notices telling them to cease operations.

In 2011, we added a feature to Steam that enabled users to trade in-game items as a way to make it easier for people to get the items they wanted in games featuring in-game economies,” says thestatement from Valve‘sErik Johnson.

“Since then a number of gambling sites started leveraging the Steam trading system, and there’s been some false assumptions about our involvement with these sites. We’d like to clarify that we have no business relationships with any of these sites. We have never received any revenue from them. And Steam does not have a system for turning in-game items into real world currency.”

Valve then go on to explain how the sites have integrated with Steam, using the OpenID API as a way for users to prove ownership of their Steam accounts and items. The rest of the information related to users Steam accounts is apparently “either manually disclosed by the user or obtained from the user’s Steam Community profile”. the latter of which likely happens when the user has chosen to make their profile public.

“Second, they create automated Steam accounts that make the same web calls as individual Steam users,”Erik Johnson continues. “Using the OpenID API and making the same web calls as Steam users to run a gambling business is not allowed by our API nor our user agreements. We are going to start sending notices to these sites requesting they cease operations through Steam, and further pursue the matter as necessary. Users should probably consider this information as they manage their in-game item inventory and trade activity.”

This all follows the recent controversy regarding prolific YouTubers who promoted a gambling site they owned without disclosing the fact. Valve have since been described as “unconscionable” by a lawyer on the case. The statement also follows a player seeking a class-action lawsuit against Valve for allowing the gambling trade to continue.

We’ve reached out to Valve for further comment and will update when we hear back.