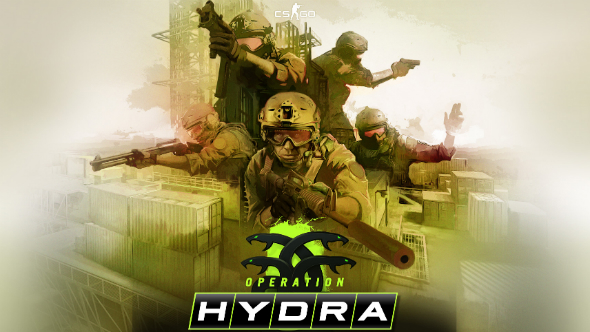 Operation Hydra is set to switch things up for the CS:GO community, right up until September. The event features three new game modes, seven new maps (four of which are brand new), a co-op campaign mode, a new case featuring a bunch of community-sourced weapons and, of course, a coin for you to display on your avatar.

Make sure you’re getting the best experience out of CS:GO with our list of the most useful console commands, launch options and configs.

The game modes are where the most unique changes have been made here. There are three to check out and each of them really shakes up the standard CS:GO formula.

Wingman is a classic 2v2 skirmish tussle on single-bombsite maps, effectively making it a tug-of-war between attack and defense.

Weapons Expert takes the standard 5v5 best-of-30 match formula and throws in an interesting twist. Each weapon can only be purchased once per player. If you die, it’s gone, so expect to see players hunting anyone with an AK47 or an AWP.

War Games is made up of six different mini-game modes.

In terms of maps, there are four brand new ones and three returning choices, spread across the bomb defusal and hostage rescue modes. These include old favourite ‘Insertion’, a rescue mission set in a Swedish countryside community. It gives the CTs a choice of four spawn points meaning the Ts have to be prepared for an assault from any angle.

The Guardian Campaign is a set of challenges, chosen by you, which enable you to earn ‘Guardian XP.’ This can be spent on Operation Stars and Operation Weapon Drops. Finally, the Operation Hydra case is your usual collection of funky-looking guns created by talented members of the community.

You can check out all of the Operation Hydra features at the official Counter-Strike website. As ever, CS:GO is a very reasonable $14.99/£11.99 over at the Steam store page.