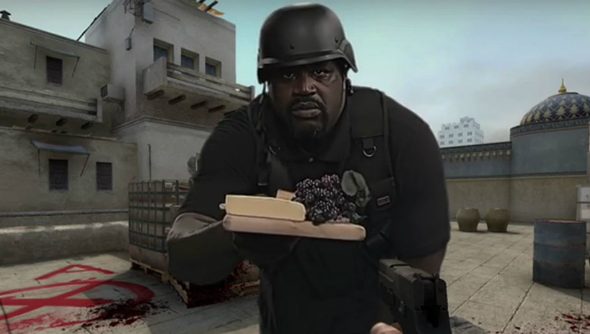 If you want to get into eSports as bad as Shaq does, how about starting with the biggest? Here are the best League of Legends champions for beginners.

The ELeague starts on May 27 and will be broadcast live on TBS as well as via Twitch, featuring 24 of the world’s best teams to compete in the first season.

Turner also happens to be the home of Inside the NBA, a Basketball post-game show hosted by the 7-foot legend himself, so who better to promote eSports on the network?

Well, anyone probably, but Shaq has recently taken an interest in the digital side of sports entertainment, investing in League of Legends team NRG and trading blows with commentators during ELeague’s inaugural Road To Vegas invitational at CES.

Of course, he’s not exactly pro-tier at CS:GO and his signature television persona is the sort that turns up to work pantsless last month, so his endorsement of the ELeague is….well, it’s mad.

Just watch it below, I can’t really talk anymore about it. Why does he like chickens so much?