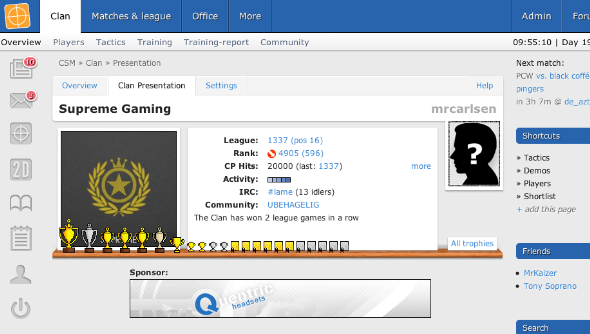 In this golden age of eSports, people everywhere will be pinning their hopes and dreams on heading up a digital hit squad of players and taking them to the big leagues. Football Manager is a relic, no one cares about balls and pitches anymore. What we need is a game that lets you shout at and praise a team of young whipper-snappers armed with mouses and keyboards.

Enter CSManager: a free browser game that channels the strategic decision making of Football Manager, but applies it to a team of professional Counter-Strike players.

As manager of a Counter-Strike team, you’ll be responsible for financing their gear and expenses, training them in the tactics of close-proximity warfare and twitch shooting, and moulding them from a rag-tag band of rookies into a trophy-winning unit.

As your teams play their games you’ll be able to see a 2D representation of their actions on Counter-Strike’s famous maps. Watch dots sprint around de_dust2!

To take your team to victory, just register at the game’s website and start livening up your lunch hour.