Following his arrest last week, Counter-Strike co-creator Jess Cliffe has been formally charged with the crime of commercial sexual abuse of a minor. The charge was issued yesterday.

The charge was issued alongside the release of a statement of probable cause. The statement reads that Cliffe organised three meetings, with a person who was 16 at the time, via dating website SeekingArrangement.com, and that on each occasion he paid her for sex. On one of those occasions, Cliffe is reported to have recorded some parts of one of the meetings without consent.

Cliffe confirmed to authorities that he did use the dating website to arrange meetings with women, and some of which included “payment for their time.” Warrants served to AT&T, Verizon, and SeekingArrangement.com revealed that Cliffe did exchange messages with the alleged victim on June 5 and 6 2017.

Cliffe has posted bail of $150,000 ahead of his next hearing, which is scheduled for February 25.

Original story, February 2:Early Thursday morning Seattle police arrested Jess Cliffe, co-creator of Counter-Strike, for sexual exploitation of a child. He has not been charged with a crime.

According to news station Kiro7, Cliffe was booked into King County Jail at 1.17am and he is expected to have a bail hearing later today. The booking record states that Cliffe was initially denied bail. 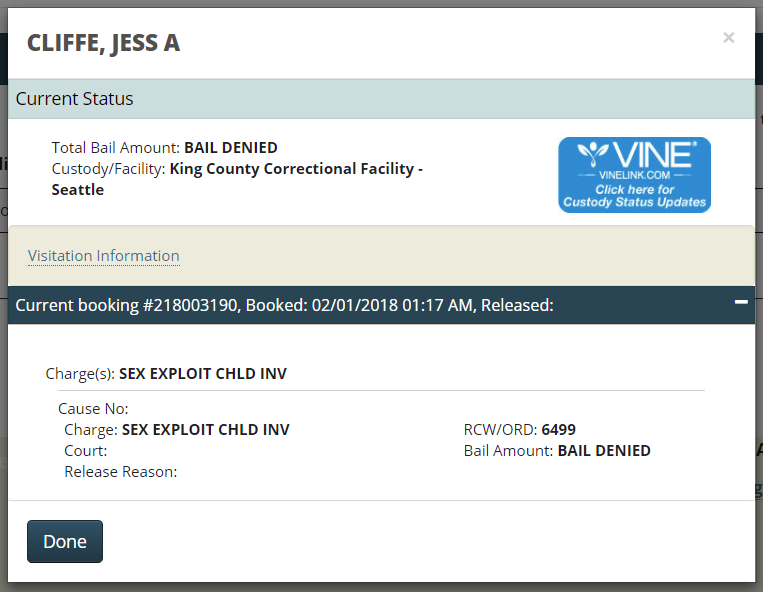 Valve told Kotaku it has suspended Cliffe, saying “We are still learning details of what actually happened. Reports suggest he has been arrested for a felony offence.”

Cliffe created Counter-Strike with Minh Le in 2000 and has worked at Valve since 2003, where he has contributed to Half-Life 2, Team Fortress 2, Left 4 Dead 2, and Portal 2.