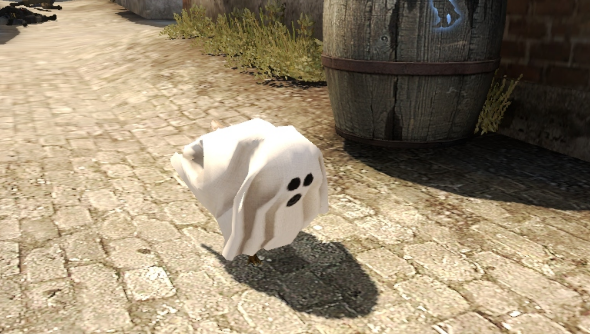 We interrupt your usual PC gaming news to bring you this horrifying report. Strange creatures have been sighted in the Italy, Militia and Inferno regions of Counter-Strike: Global Offensive. Floating approximately three inches above the ground and making chilling noises, the creatures were first reported in by terrorist forces as spectres from the afterlife, come to act as a warning to UN forces not to meddle in their bomb-planting affairs.

After a lengthy investigation, counter-terrorism UN operatives have revealed the creatures to not be ghosts at all, but in fact chickens dressed up in white sheets. Commanding Officer in the investigation Sergeant William Blake said in a statement: “The chickens in the three affected regions were just celebrating the Halloween holiday in the normal manner, and pose no threat to the peacekeeping operations we perform in the areas. We’ve negotiated with them at length, and they’ve agreed to take off the sheets before sunrise tomorrow.”