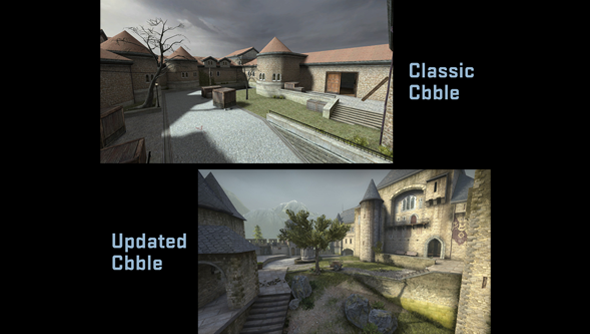 De_cbble was one of my favourite maps on Counter-Strike: Source. It’s vast open areas made for difficult advances and harried defences. Its tight corridors were killboxes where large groups of players could be killed within seconds. So it’s really good news that Valve are remaking it for Global Offensive.

They’re not simply upping the visuals but also fixing issues with the game’s chokepoints and scale while keeping true to what made the original unique.

Not just that but Valve are making a whole new map, too.

Overpass “is composed of two very distinct environments, with the lower part of the map set in an open canal and the other in a public park,” write Valve. “The overpass pillar is a clear target for the Phoenix faction. CTs will have to push into the site to safely protect it. The openness of the environment means that Ts are able to smoke and flash the site before going in.”

The GSG9 spend the map defending a military shipment from the Phoenix Faction. There are two routes open to the terrorists: they “can either attack the shipment head-on or attempt to take down the overpass itself.”

From the pictures, which you can check out in the blog post, make the map look like it will be a pretty intense affair.

De_cbble on the other hand presents Valve with a different challenge. The map’s “uniquely large scale meant it was a lot of fun on servers with lots of players. Our goal was to retain this aspect while making the map more interesting and viable for more intimate 5v5 play.”

They identified a couple of problems with the original’s design “its paths to bomb sites were long and disconnected from each other, ending in tight choke points. This meant that teams were unable to react and change strategy mid-round. The same choke points that made it difficult to plant bombs made it near-impossible to re-take a site and defuse a bomb in time. The lack of strategic options made de_cbble’s gameplay feel limited and monotonous.”

To counter this they’ve taken a lot of de_cbble’s closed corridors and opened them up to the sky. They retain the tightness of the original but now you can fling grenades over barricades. Valve are giving more tactical options to players.

Valve have also filled out de_cbble’s empty courtyards with incidental details and pieces of low cover. Breaking it up visually as well as creating more interesting arenas to fight in.

You should really read the post about how Valve approach map design. It makes for a fascinating read.