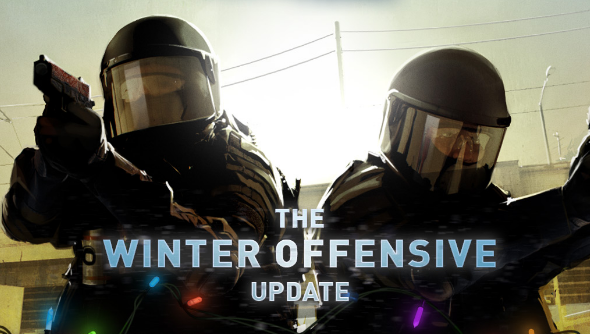 The Winter Offensive update is green to go in CS:GO, spreading Christmas cheer amongst all good Terrorists and Counter-Terrorists this holiday season. In Valve’s Santa sack this year is absolutely nothing seasonal at all; no maps are getting a snowy makeover, nor are the soldiers in the field getting red-and-white uniforms. Instead there will just be the usual lashings of red bodily fluids, and a few extra care packages filled to the brim with pretty shooters.

Valve are implementing three different gifts for The Winter Offensive: the Gift Package which gifts a special item to one random player in your match, the pallet of Presents which showers gifts over nine random players in your match, and the Audience Participation Parcel, which gives random items to 25 viewers of your match.

This very special time of year is also host to the first ever community-made weapon crate, with The Winter Offensive case containing a selection of finely decorated, fan-made blasters. If you ever wanted a pair of bright yellow 9mm handguns, or a pink FAMAS, then this is the update for you. An eSports Winter Case replaces the previous case and is part of Valve’s crowd-funding initiative. The guns inside are exceptionally slick-looking, and a portion of the profit made off them goes to CS:GO tournament prize pools.

Finishing up the update are two new maps. Overpass sees Counter Terrorists defend a canal overpass that terrorists are trying to blow sky-high, whist Cobblestone is a revamp of the stately home Counter-Strike Source classic.