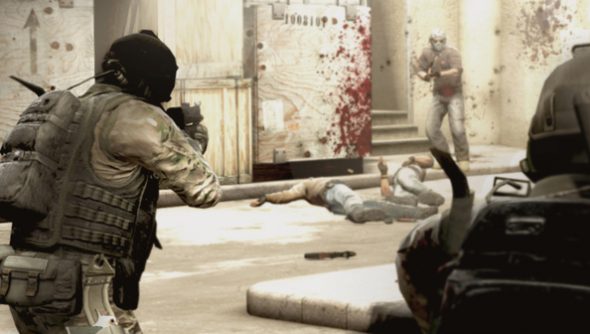 ‘Change’ and ‘Counter-Strike’ aren’t exactly natural sentence-fellows, but nor are Valve willing to tiptoe around a decade and a half of CS tradition. That’s the message sent by – if not written in – the patch notes for CS:GO’s latest update.

Valve’s Counter-Strike dev team have made adjustments to rifles, pistols and the P90 in consultation with pros from “around the world”, as well as global changes to recoil that will affect all of the game’s weapons.

The developers have also added a new Deathmatch mode for matchmaking and offline play, applicable to Classic maps, Demolition and Arms Race. It’s at least partially designed to ease the process of map-learning.

“Practice your aim with individual weapons like the pros,”, suggest Valve. “Spawn with a random weapon, or boost your score by taking advantage of bonus timers. There’s no wrong way to play.”

What’s more, Valve have launched a private beta for a new ‘Map Workshop’, which will presumably take advantage of Steam Workshop’s charmingly functional rating and subscription interface. If you are a mapmaker, you’ll want to go here.

Oh, and they’ve tweaked the messaging system. For that and everything else, check out the patch notes below:

– A new game mode has been added to matchmaking and offline play: Deathmatch.
– Weapon balance and recoil were adjusted with pro community input ( Thanks to J3Di, NiP, VeryGames, ESC, 4NOT, mTw, and FM TOXiC )
– In addition to global changes that affect all weapons, specific adjustments have been made to: rifles, pistols, and the P90.
– Weapon purchasing changes:
– The AWP’s kill reward was increased from $50 to $100.
– The Glock is now a Terrorist only weapon.
– The FiveseveN is now a CT only weapon.
– The Terrorists’ molotov price has been reduced to $500. The CT’s incendiary grenade remains $850.
– Note that the pistol arrangement has changed in the buymenu.

– The messaging system has been converted to protobuf.
– Demos recorded with previous versions of CS:GO will not be compatible as of this update. In order to view old demos, set your ‘beta’ to ‘demo_viewer’ in the CS:GO betas property panel, in Steam. Don’t forget to set it back to ‘NONE’ when you want to play online again.
– If you are running SourceMod on your server, you will need to update to the latest version. For details, see: http://www.sourcemod.net/index.php

– Added some performance improvements for low-end clients.
– Fixed some fence materials that were allowing players to see through smoke grenades.
– GOTV spectator UI will now correctly show kevlar and helmet information for players.
– Avatars will now correctly load for all players when connected to a GOTV server or when watching a demo.
– Added support to notify players during servers maintenance downtime.
– Fixed a dedicated server exploit where community dedicated servers could masquerade as official and get players searching for official game modes connected to them (saigns.de)
– Fixed a rare problem when clients matchmaking for Classic Competitive game could be stuck on green Accept screen
– Fixed a rare problem when clients could connect to a Classic Competitive game and then later be disconnected for failing to accept the match.
– Improved algorithm pinging whitelisted dedicated servers when searching for Classic Competitive games, pinging less addresses fixes occasional problems for some customers where address translation tables on their routers would fill up and their routers would fail to route required packets to display the green Accept screen.
– Added support for mm_dedicated_search_maxping to restrict client’s ping when matchmaking for Classic Competitive games. ( Matchmaking algorithm will still be prioritizing best servers to minimize ping of all party members. )
– Fixed a rare server crash when bots attempted to shoot the bomb defuser.
– Fixed a client crash when downloading a lot of custom assets from community servers.

– DEATHMATCH:
– Deathmatch uses the nav mesh to create spawn points. Make sure that your nav is contained within the bounds of your map to ensure that players aren’t spawned outside of it. Use map_showspawnpoints to see where spawn points were generated.
– If you want to use mapper-placed spawnpoints instead of the randomly generated ones, place an info_map_parameters in your map and set usenormalspawnsfordm (“Use Normal Spawns in Deathmatch?) to true.