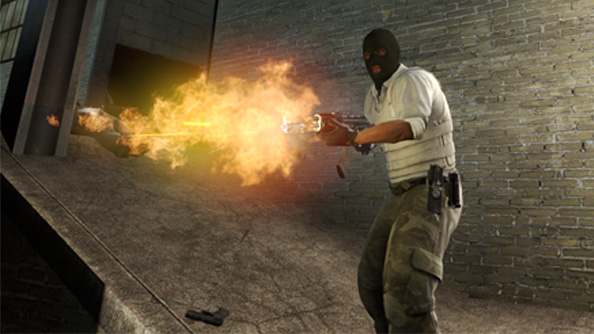 The single life remains forever compelling. With only one life to live, every single part of that life is elevated in importance. Every kill is one less person to deal with, each placed bomb the entire swing of that game, held in the balance. Counter Strike: Global Offensive is still compelling. It’s still Counter Strike.

But that name is a statement of intent. As popular as Counter Strike is, it’s never quite smashed through and become something that everyone plays, and everyone talks about. It’s not Call of Duty, and would certainly never want to be, but a bit of that success would be nice yes please. Counter Strike: Global Offensive is Valve’s attempt to make Counter Strike as accessible and appealing as it ever can be.

That singular purpose permeates everything about the game. This is also the first major attempt to break into the console market, and while that means that there is a prevalence of radial menus and stripped down menus, they’re as verbose as you could want where it matters. Once you’re in the game itself, though, it’s that simplicity that comes to the fore. Counter Strike was always Spartan in its approach, but now it’s elementary, so far as barriers of entry go. Any obstacle you could stumble upon has had the edges sanded down, all the walls are made of cushions.

While yes, there is still the ability to join games through the server browser (angry mobs with pitchforks would mobilise were this not the case), higher in the Play menu is Quick Match, Casual Modeand, both of which let you cut through the faff and get to a game as fast as possible. And this is Counter Strike with game modes, except they’re not quite what you might think.

Instead of Capture the Flag or Deathmatch, thankfully, there’s instead Casual and Competitive variants, which alter the rules of the game appropriately. Casual is much friendlier, taking out things like friendly fire and giving you more cash so that you can buy the guns you want to buy. The game is still the same, but it’s just easierto get into. There’s less of a metagame, and less punishment for not playing pitch perfect. And when Counter Strike was always a fan of the ‘Sheer Cliff’ of game design when it came to difficulty, that’s a welcome shift. The maps themselves seem by and large to be unchanged. The classics are already all in place, and their geometry and architecture are immediately familiar. Dust is still Dust. Italy is still Italy. Inferno is still… yeah, unfortunately it’s still Inferno. But Valve never wanted to mess with the things that they already knew worked. That’s not what Global Offensive is about.

The guns, too, are the same guns that you’ve learnt the keyboard shortcuts for over the thousands of times that you’ve run through them. Just because there’s a radial menu doesn’t mean that anything significant has changed. In more than one ways Valve are doing the same thing here that they’re doing with DOTA 2; updating and graphically overhauling a game that is not even remotely broken. It’s very much a case of not broke, so don’t fix.

But they are reinterpreting, and that’s where the DOTA 2 comparison falls down. There’s just as much new as old, here, which is good as Counter Strike: Source still looks absolutely fine, and with it there there’s really no need to just graphically overhaul the game. Instead they’re refining the way the game plays, both to make it more accessible and to remove some of the player swarming that plagues the player-run servers in both Source and 1.6.

By far the biggest change, however, is in shifting the team size from pretty much whatever the server host wanted down to just five per team. It seems like a concession, at first, forcing a technical limitation perhaps found in the console architecture and forcing it upon the PC just because. But this isValve we’re talking about, and it’s not long before you realise why it makes sense. Counter Strike is a game about tension, at its heart. It’s never the moments of action that you live for when you play, however thrilling they are. It’s the slow pace of the cat and mouse between players, where you’re slowly creeping around corners and checking every single possible camping spot you can as you move through the level. It’s the quiet bits that make the times where the action blasts at you shine. Incessant, relentless gunfights are what Call of Duty does best, and there’s a good argument for saying that such a thing reduces the power of such scenes just through their proclivity. Counter Strike is a different beast, a powerful, slow, methodical one.

That’s why five per team works so well. With the larger servers, the game almost always devolved into a fragfest for the first minute or so. People would die left and right, just through the sheer volume of hot lead flying through the air. Here, while there is always that first, frenetic salvo, it’s rare more than one or /maybe/ two people go down. It’s more of the first feint in a fencing match than the opening barrage in a naval battle. It turns the game from what many might remember as twenty seconds of excitement followed by ten minutes of spectating into a game where you spend much more time alive, and much more time sweating. Sweat is good.

It also breeds a sense of teamwork that is lost with those larger teams. You stick together, close knit by the situation, and are forced to cover one another. If a single player goes off to find themselves a sniper spot, they’ve deprived the rest of you of 20% of your fighting force, leaving you at a distinct disadvantage when it comes to a firefight. As odd as it might be, the immediate comparison comes with DOTA and League of Legends, where it’s teams of five act as a the perfect counter to one another, and with just the right amount of space for one player’s lone-gun tendencies can get everyone killed.

Or, if they know what they’re doing, win you the fight with the perfectly timed flanking manoeuvre.

The 5v5 limit is enforced for competitive games, but server hosts are free to expand their server sizes up to 15 per side, if they feel like it.

There’s a temptation to view Global Offensive as a commercial offshoot of the pure experience that most hardcore Counter Strike fans hold dear to their hearts, but after a few rounds it’s immediately apparent that this is not the case. It might look a little different, and the UI might be more than a little stripped down, but what is on offer here is something altogether separate to Source or 1.6. Separate, but at the same time the pure distillation of what makes Counter Strike so compelling for so many people. There are always going to be the naysayers, but the fact remains that GO offers both a gentler experience for players new to the game, and something more tactical and pure for those who’ve devoted hundreds of hours to it.