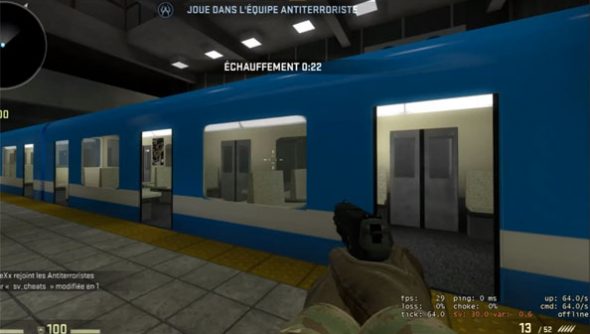 In what’s I’m fairly comfortable wagering is new ground for the Canadian travel authorities, the Société de transport de Montreal plans to sue a Counter-Strike: Global Offensive map maker for recreating the city’s Berri-Uqam station in-game. The STM are prepared to issue Diego Liatis with a $50,000 fine plus court costs if the map is released to the public as planned, says the modder.

The STM’s issue with the map is the now perennial one – terrorism, or rather their customers’ fear of it. The Escapist report that transit company contacted Liatis to tell him that they worried the map could “create panic among the city’s public transit users”, and therefore would consider legal action if its “copyrighted metro network” appeared in the game.

Liatis had originally requested permission to recreate the station in January, but had been refused. Project programmer Frédéric Denis said that the situation was “ridiculous”, and pointed out that terrorists could research the station’s layout in much the same way as his team did.

All of this debate pales in the presence of a more pertinent question, though – is it any good? Check out Liatis and co’s efforts below and let us know.