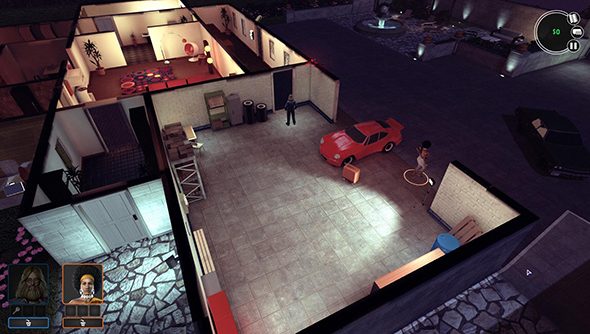 As the old adage goes: fail to plan and you plan to fail, but fail to plan to fail and things will probably go alright for you. That’s the mantra behind Crookz, a heist simulator with a ‘70s twist so groove-tastic that the game’s title has had its ‘s’ transform into a ‘z’.

It’s an in-development, single player puzzle adventure in which you control up to four thieves at once, plotting out their moves in advance like you might have done in classic Rainbow Six. Each of your thieves has a unique set of skills that can be applied in a number of different ways. Your bruiser character will be capable of clobbering guards from behind, for example. knocking them unconscious long enough to allow the rest of your team to safely slip by. 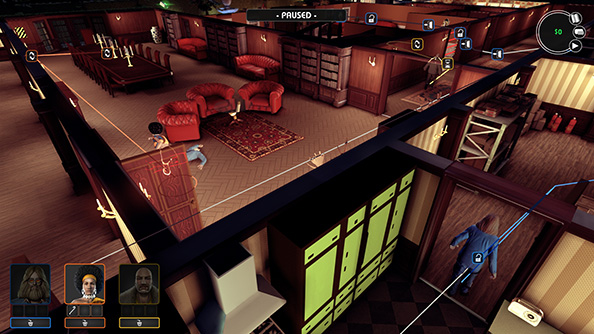 You’ll have a locksmith too, as well as a technician who can disable laser tripwires and other alarms. The idea is to plan a number of actions to occur simultaneously, drawing out paths through the building for your thieves to follow, dropping stop commands on those paths to synchronise their movements, before hitting play and, if all goes accordingly, watching your plan unfold in realtime.

In the demo I was shown, a technician fiddled about with some security panels in an outhouse, disabling a lock for just long enough for my ‘70s afro lady to slip into heavily guarded foyer. Heists tended to play out in tandem like this, with certain characters holding open doors for their colleagues elsewhere in the map. Brute force is an option for the less discerning heister however, and doors can be loudly smashed open if a lockpick isn’t to hand. 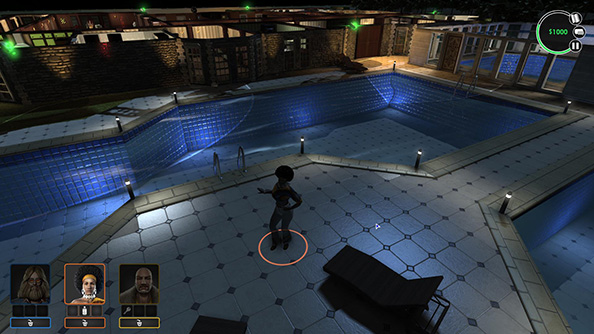 Crucially, all of the buildings you’re stealing from are fully cased from the outset. Upon starting a mission you’re presented with a full blueprint of all guards, cameras and other interactive objects in the map, and how they’re all wired up to one another. You can even, the developer promises, plan the entire heist in one single move, though it seems the optimal way to play is in short chunks of planned actions, little ten second bursts that allow you to adapt your approach to the heist as it plays out. You could also play in real time if you’re the impatient sort, ordering your thieves around like it were an RTS.

There are enough additional objectives and trinkets around each level to promote a degree of creative lateral thinking, and your thieves’ abilities aren’t loosely defined enough to allow a number of different solutions per heist. The locksmith can unlock doors, for example but so can any thief with a lockpick in their inventory.

Ignore the cringey title and Crookz could be an interesting little heist sim, a chunky and stylish puzzle game that sort of looks like something that could have appeared on a PC Zone demo disc in the late 90s.