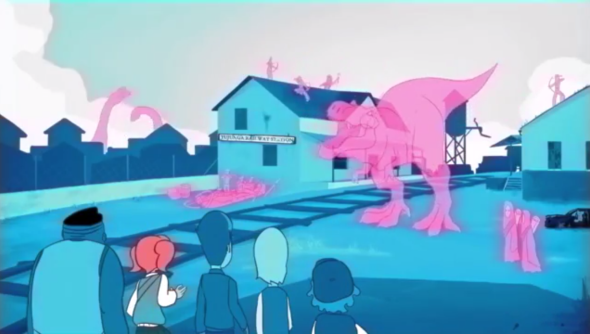 Crossing Souls is clearly inspired by 80s coming of age films, the trailer has hints of Stand by Me, the Goonies, and E.T, and the setup sounds like something straight out of the era. Set in 1986, five Californian teens enjoy a long summer away from school. They find an ancient Egyptian artifact that lets them cross between the realms of the living and the dead.

It’s Fourattic’s debut game and the trailer looks all kinds of lovely.

Crossing Souls’ action initially resembles the original Zelda, you’ve that nearly top-down view and spend your time fighting bosses, pushing objects around, and finding new items. That’s complicated by the five characters who all have different abilities. And, unlike Zelda, there are moments where the action diverges from the core game, throwing out minigames like the bike chase we can see in the trailer (which looks a lot like the motorbike chase sequence in the NES version of Terminator 2).

You’re given the whole of the children’s town to explore and, while some areas are initially blocked off, as you unlock items and abilities, you can find ways around the obstructions. You can switch between your five characters at will, allowing you to use each of their abilities when it’s needed.

I really like the look of Crossing Souls, it’s charming, referential, and taps into a stack of classic games for ideas. However, it’s difficult to know how fun it will be to play in practice. We’ve seen realm switching before, we’ve seen box pushing puzzles before, and the boss fights don’t show off anything new.

If you’d like to read more about the game and possibly support it’s development then check out Crossing Souls’ Kickstarter.