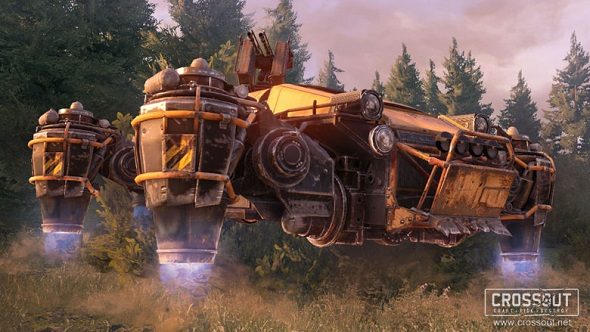 While Crossout left open beta just over a couple of months ago, it looks like it’s already getting a big update, in the form of a brand new faction. Called the Dawn Children, they’re a technologically superior faction that are bringing along futuristic vehicle parts and weapons to the game, we got to see some of them at Gamescom.

To get the upper hand when trying Crossout out, use our beginner’s guide.

Similar to when a new nation is added in War Thunder, the Dawn Children’s vehicle parts and weapons will allow you to create new vehicles, with this new technological focus. One of those is hovers, new technology that is used instead of wheels to allow vehicles to hover, making them much more manoeuvrablebut also more susceptible to being unbalanced if knocked around.

The new faction should be coming to Crossout soon, with what looks like the first teaser of many now up on the game’s blog. Not described there are some of the weapons we were told about: the Dawn Children will be bringing their technology to weapons too, in the form of laser and plasmas. What exactly that entails, we’ll have to wait and see, but presumably it should tear through enemy vehicles quite nicely.

In our interview, we also got a nice fact about Crossout: the game had three million players in the first month of its open beta, with one million creations uploaded to the in-game workshop. Car-based slaughter is popular!