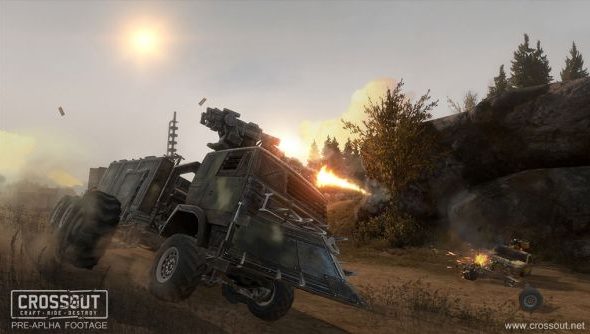 You don’t have to be Mad to join Gaijin’s new multiplayer post-apocalypse, but you’ll need to be a bit Cross. The War Thunder studio have recruited the outfit behind off-road racer 1NSANE 2, and together they’ve made a PvP game about destroying enemy rides in your own Interceptor armed with cannons, spikes or circular saws.

Crossout is currently in pre-alpha on PC. Players will lay further waste to a world already devastated by alien invasion and human genetic testing gone wrong. Presumably, property damage isn’t a thing people worry about past a certain devastation threshold.

“Crossout is about customization,” said Gaijin boss Anton Yudintsev. “The freedom to construct the most destructive vehicles to wage war against your enemies.

“Trading, earning or purchasing parts and upgrades for vehicles, survivors can build the perfect fighting machine to their own preference, taking into account how each new addition affects the whole vehicle’s performance.”

Apparently no two vehicles are the same, and cover the spectrum of weight categories from Baby Peach to Bowser. Interchangeable parts include armour, weapons, support systems and cosmetics, and can be exchanged via an in-game auction system.

“When destroying your enemy’s gun with a precise shot and leaving him defenseless, that creates a lot of satisfaction,” said CEO Stanislav Scorb. “And when you reach the enemy’s base, crawling on the only two wheels left, that’s even more exciting.”

Beta application has begun ahead of a summer testing period – think you’ll take a trip down a facsimile of Fury Road?