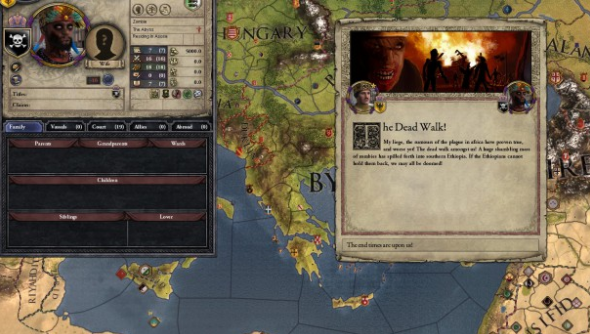 If the world was struck by the zombie apocalypse today, modern fiction dictates we’d almost survive it. Of course this is a load of tosh and it’s inevitable we’d all succumb, but if we were to stand any chance the key to zombie defeat is a) guns and b) cars filled with stolen petrol. So what exactly would the chances of survival be if this hypothetical outbreak occurred before the dawn of sliced bread. Say, the middle ages? Would the sword and shield be enough? Let Crusader Kings Z provide you with the answers.

Crusader Kings Z is a mod, although its life started as a bit of an April Fools prank. Back in April Paradox’s gag was to announce their Zombie-themed sequel Crusader Kings Z on Facebook. A mere joke to Paradox, this was the spark a group of modders needed. And now, seven months later, we have the game in playable form.

Akin to Sunset Invasion, which is Paradox’s own stab at alternate history, Crusader Kings Z’s calamaty occurs at 1000 AD, when a zombie horde breaks out in Ethiopia. Their numbers swell as they consume flesh and convert the living into one of their own, and gradually the plague of dead spreads through Africa and Europe. You’d best have an army of hand-picked knights waiting and ready for them, with strict instructions to sever their heads and burn the bodies.

Oh and whilst you’re at it, still keep an eye on the Royal Court. Zombies may be raiding the land, but that’s the perfect opportunity for your enemies to commit high treason.

For zombie fun without the shotguns and hiding in barns for an entire season, download Crusader Kings Z from the Paradox forums and have yourself a jolly gory time.