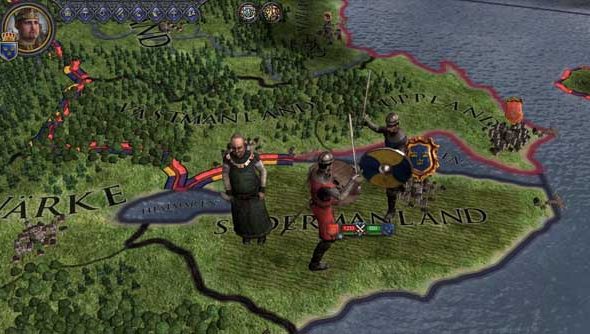 The Crusader Kings 2 update train is steaming along nicely, just last month it pulled in at backlog update, a small interim haulage stop which saw the cargo carriages loaded to the brim in antique patches with descriptions written in ye olde English…e, and aged features boarded in their droves. It’s pootled ahead in the past month, crossing the development plains at a frightening pace. So fast, in fact, that we were caught off guard by the news that it had already drawn in to emancipation station.

Yes, it is there that the feature allowing you to grant nations independence as a diplomatic gesture boarded the train (we believe he was wearing a russet cap).

That’s not the only new passenger though, read the manifest below.

Here’s the full list of new passengers and cargo. The major dignitaries are at the top, naturally. If you wish to mingle with the lower classes, they are beneath the portrait of our Nine Days’ Queen, the Lady Jane Grey.

Major:
– Merchant Republic gameplay (Duke or higher tier Republics with a coastal capital)
– Added a ‘Grant Independence’ diplomatic interaction
– Titles can now automatically change name depending on the culture of their top liege
– The Reign length opinion modifiers are now dependent on how long a character has been the liege of someone, not how long the primary title has been held
– Added 1241 Bookmark – “The Mongols”
– Save file transfer now works on Mac
– Reduced max demesne size from ruler tier, especially for Dukes
– Reduced the effect of Stewardship on max demesne size (now 15%, down from 25%.)
– Added a max demesne size bonus (+1) for dukes with more than one duchy
– Increased the Prestige effects of a rank difference in marriages by a factor of 5
– All merc regiments now grow in max size over time
– Added more mercenary bands: Finns, Lapps, Abyssinians, Nubians, Lithuanians, Scots, Irish and Alans
– Added Ultimogeniture succession law
– Added Tanistry succession law