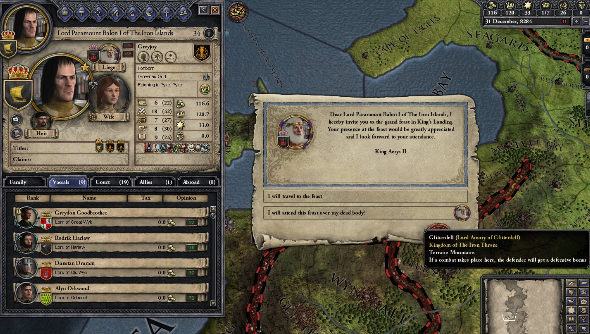 Crusader Kings 2: it’s all the fun of Game of Throne’s regicide, bastards, and political backstabbings with none of the mystical dragons and zombies nonsense. But would it be more fun if you could release a trio of winged reptiles on unsuspecting territories? Perhaps, and it’s certainly something that Paradox themselves have thought of.

“It would make a great franchise for us,” said Paradox’s CEO Fredrik Wester. But he does have some reservations.

Talking at a round table session at ParadoxCon, Wester said: “The reason we haven’t approached HBO is that I’m still on the fence because I’m not sure it’s the right route for us to take.”

“It would make a great franchise for us, it’s just that we just need to get over that inner feeling that it’s not the right thing to do … it’s a lot about creative control.”

HBO themselves have been in contact with Paradox though. Not to pitch a game though, but rather to express concerns over the Game of Thrones mod for Crusader Kings 2. The TV company were concerned that Paradox were making money out of their property. “They’re not shutting it down. They’re just a bit… wary about us monetising it, or if we’re marketing it. It was after the Kotaku article [about the mod],” Wester said. “They were like, ‘this article’. I’m like, ‘yes, but we didn’t write it, it was someone else.”