Nearly a year after it was initially announced, Crusader Kings 3 released on September 1st, 2020. The reviews are all in now (more or less) and the word is good. Our own Crusader Kings 3 review mentions that it’s the most polished Paradox strategy release ever, and if you browse any of the 46 critic reviews that have dropped to date (none of which, currently, are lower than a eight) then you’ll see we’re not alone in our praise. I mean, we can’t all be wrong…

Crusader Kings 3 doubles-down on the RPG elements that made the previous game so accessible, and allowed it to break out of the assumptions people had of these kinds of games. Combined with a ground-up approach to design at all levels and a specific focus on how it presents information it wants players to know, this new entry has been propelled to new heights. It is, without a doubt, one of their most accomplished launches to date, and the true successor to the legacy of grand strategy as we know it today.

So, naturally, I want to talk about Imperator: Rome.

A Dynasty is Born

Crusader Kings 2 was an interesting event. Experimental in more ways than one, it was still essentially a game made for those who were playing Hearts of Iron 3 or Europa Universalis 3. The original Crusader Kings was also done as an experiment; one Paradox evidently felt could be expanded upon in a sequel that, with a little imagination, could also try to pull in new audiences to the niche they had quietly made for themselves. 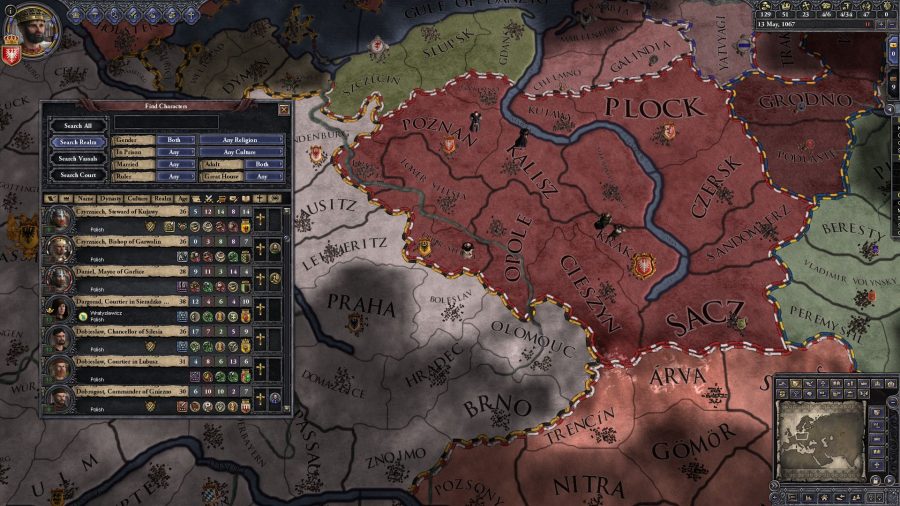 I don’t think anyone at Paradox during this time could have expected Crusader Kings 2 to take off the way it did, and it did a lot to inform what grand-strategy would become across future releases. Europa Universalis 4 came next and it was still by-and-large a more ‘traditional’ Paradox strategy game, but Crusader Kings 2’s impact could still be felt. This became especially true in the later releases of Hearts of Iron 4 and Stellaris. Everything from how to design these games for modern audiences, to building a pipeline for DLC that could span nearly a decade was begun in a game that would’ve had a fraction of the investment Crusader Kings 3 itself is likely to have received (this is highly speculative).

It’s easier to remind yourself in Crusader Kings 2’s specific case since the base game is free-to-play, but I’m genuinely of the opinion no long-standing Paradox players really remember what Crusader Kings 2 or even Europa Universalis 4 were like at launch. They were fine, but they were also clearly in need of some filling in. Crusader King 2’s initial DLC wave was spent making non-Christian factions worth playing and enabling them as options, where-as over the course of Europa Universalis 4’s life-span many mechanics were changed beyond recognition.

Crusader Kings 3 then has had to answer many questions, the chief of which being what a modern grand strategy game needs to look like when faced with the growing bulk of an outrageously popular predecessor benefiting from over eight years of additional development. Its response to this question has been fantastic, to say the least. 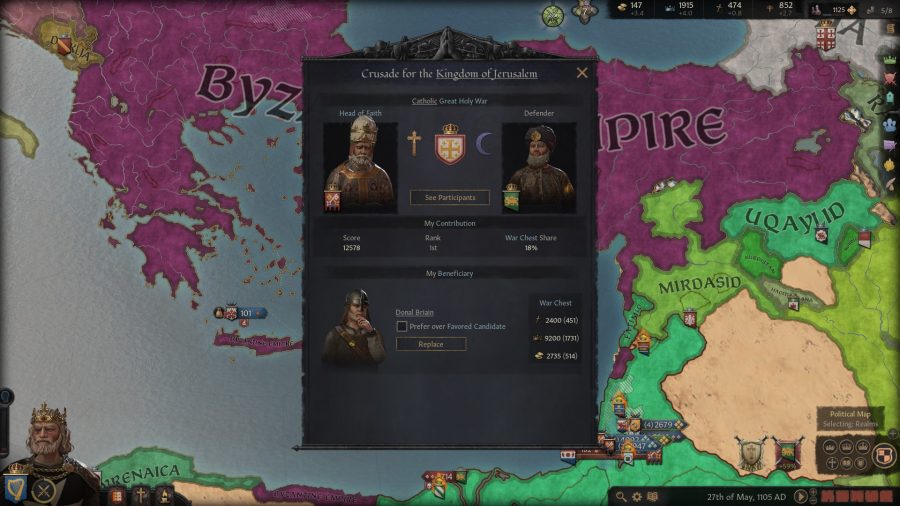 This was the same question Imperator: Rome had to answer as well, and many found its response wanting.

There is a story about Imperator: Rome. It involves a shockingly small development team, and a claim that the project itself existed because one man wanted to challenge himself to create a game from scratch like he did in the good old days of Paradox’s earliest beginnings. It’s the kind of pioneering spirit that gave us the original Crusader Kings and Europa Universalis in the first place, and bearing this context in mind what the Imperator team managed to achieve with Version 1.0 is just short of miraculous. In hindsight, it also seems that this kind of spirit was no longer going to be enough on its own.

I suspect I’m a Paradox apologist, having known them and worked with them for so long. I still argue that Crusader Kings 2 — the game that launched a thousand DLCs and the grand strategy legacy — was released in a state that was little better than Imperator: Rome’s. I also concede that, in the face of what’s happened over the past eight years, what Imperator offered just wasn’t going to cut it. Given how good Crusader Kings 3 appears to be, I’m also now irrationally annoyed at the prospect of what Imperator could have been if given a bit more attention. 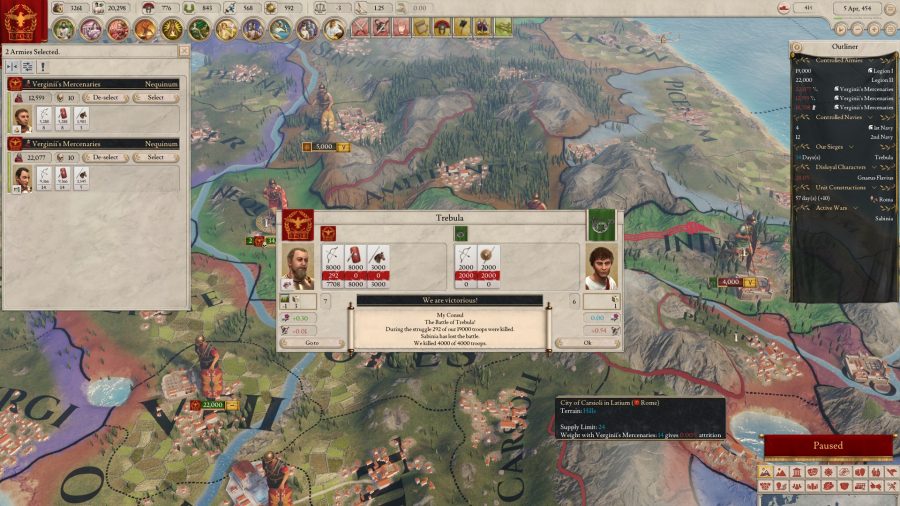 It’s in much better shape now, but current player numbers make me worry about how much steam there is still to keep this project going. Previous Paradox strategy games have fallen quite quickly as well — the spin-off titles Sengoku and March of the Eagles spring to mind — but it always felt Imperator was destined for more.

I don’t want to get too assumptive: There is no guarantee that Imperator would have been made at all if the team hadn’t agreed to work with limited resources. I will always be grateful that it exists (love me some Ancient Rome), and as mentioned above what they managed to achieve, and how they’ve managed to turn the game around in the year since launch, is definitely worthy of praise.

But I also don’t think I will ever get over how Imperator: Rome was not afforded the same chance as Crusader Kings 3. There were probably legitimate business concerns, although it’s worth pointing out that Imperator launched with more players than Crusader Kings 2 did (according to Steam Charts). 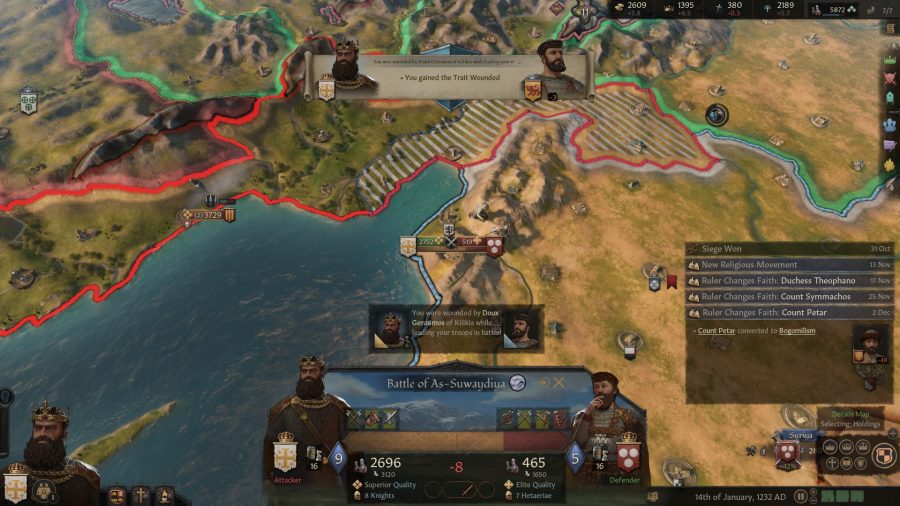 There’s no question regarding the success of Crusader Kings 3. The previous entry was never my favourite of the last generation of titles but even I have thoroughly enjoyed my time with the sequel so far. It embraces the role-playing elements in a way Crusader Kings 2 was never really designed to do, making the map-game less cumbersome for those of us who prefer a more dedicated map-based gameplay.

It’s also a triumph in tutorialisation and UI design, and generally gives life to what’s happening on screen in a way that few games of this nature have managed to date. It’s the triumph that I wish Imperator could have been, but I also think Imperator was the last attempt to make a game like Crusader Kings 2. A new approach is required for a new age of Paradox grand strategy titles, and Crusader Kings 3 is likely to follow in its predecessor’s footsteps and show us the way.