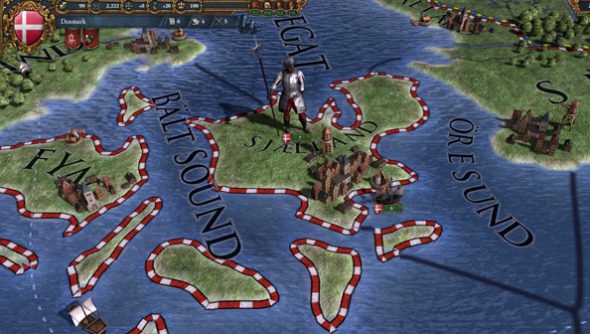 It was bound to happen sooner or later. Paradox are letting players join their campaigns in Crusader Kings II to their soon to be released Europa Universalis IV, making for a single 800 year campaign. If they keep this up you’ll be able to play the entire span of human history in one sitting. (Danger of getting a dead leg is high.)

Once the game and the saved game converter are released you’ll be free to play from 1066 till 1821.

Crusader Kings II runs from 1066 to 1453. Enough time to either dominate Europe with one of the larger powers or take a micronation and put them more firmly on the map, maybe as the nation that foolishly went to war with France, as I did with the Count of Napoli. Europa Universalis, meanwhile, will run from 1444 to 1821. As you can see, there’s a neat little overlap.

Paradox are rewarding those who preorder the game with the saved game converter, as well as a copy of Crusader Kings II. If you already have a copy then you can always give it to a friend.

Preorders will begin on 1 August and is due for release on 13 August.