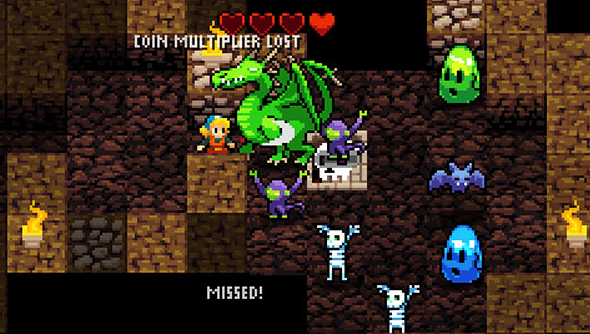 Like the zombified dancers in Thriller, Crypt of the Necrodancer’s latest (and largest) update has slid onto Steam. It adds new characters, NPCs, and a whole new boss fight – the Coral Riff.

As if fighting dragons through the power of dance wasn’t enough, Coral Riff is an entire band of enemies, from violins to drums, you need to dispatch.

Brace Yourself Games has you explore an ever-deepening dungeon by moving in time to the game’s soundtrack. You can only hit enemies by moving into them on the beat, otherwise you’ll take damage. I’ve played a little (until my lack of rhythm became impossible to deny) and it’s unlike any dungeon crawler I’ve ever played.

The highlights of the update are the new characters: Melody and Dorian. Each character in Crypt has different starting equipment and stats, some are waiflike in the health department but pack a cracking punch (still, for the rhythmically challenged you might want to go someone a little more forgiving, like the bard).

There’s also three new NPC characters – the shriner, pawnbroker, and conjurer – who you can meet in your journey deeper into the dungeons. Each can provide a different service to aid your descent. The pawnbroker for instance will buy items off you, giving you gold in return which you can use to buy equipment from the shopkeeper.

The final big addition is the new boss: Coral Riff. You can see him in action here:

Do you reckon you could win in a fight against a keytar?

– Made holster use LEFT+RIGHT slot, so you can now store weapons in holster for future throwing

– Added an option to enable VSYNC

– Reduced Dagger of Phasing damage to 2

– Made Dagger of Frost do piercing damage

– fixed issue where some characters would die when entering DDR mode

– Made the game default to Bard for debug builds, since he’s much easier/faster to test with

– made distinction between phasing and piercing weapons

– fixed issue with leprechauns moving while doing their disappear animation

– fixed crash bug in input class related to custom key bindings (could be the cause of some of the crashes on startup?)

– made giant armadillos able to destroy all destructible wall types

– made barrels/crates not count for ring of courage, blood weapons, spell cooldowns, etc

– fixed bug where fear would persist across levels

– added downloaded_mods folder to try to prevent re-publication of mods

– hide confusion particles if you die when confused

– fixed bug that sometimes allowed 2 chests (one normal, one mimic) in one level in hardcore

– made diamond dealer’s items not refresh until one is bought

– made it so thrown weapons and rifle shots can aggro shopkeepers

– made all mimics damageable by bombs even when stealthed

– fixed bug where things like golden lute could be generated by scroll of need, transmuting, etc.

– made wraiths unable to spawn in secret shops

– fixed bugs with Dove getting hit while submitting scores, and not unlocking zones properly

– fixed bug where rook could castle without the king

– Fixed crash bug with Ring of Charisma and non-sale shrines

– Made Dorian not leap in the lobby