The recent craze for the Cthulhu Mythos has been handled with the subtlety of a monster sticking its fangs in your backside. Few know how to effectively depict the insanity that arises from seeking truths beyond human comprehension with any amount of care.

However, the folks behind Fallen London and Sunless Sea have proven they are masters of the genre. Which is why you should be paying attention to Cultist Simulator – it’s made by some of the same people, game director Alexis Kennedy included.

How death influences Alexis Kennedy on Sunless Seas, Dragon Age 4, and other games. 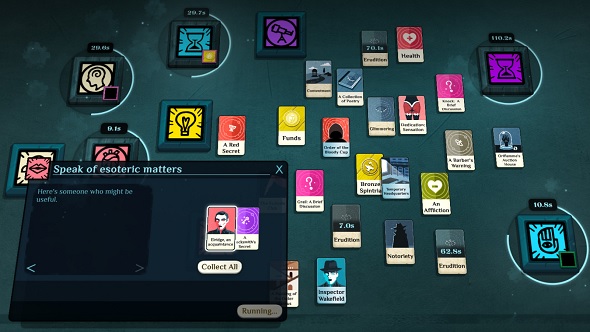 Cultist Simulator’s setting is left to the imagination beyond its trappings amid the 1920s – when H.P. Lovecraft published his earliest works. This makes it unlike the unabashedly weird and specific Fallen London universe that the team wove together previously.

However, despite that difference, the game bears the same quality, with the most important touch being how the supernatural is served up – scintillas of lore rather than expository deluges. You know as much or as little as the character you play, and that makes your search more personal – you’re experiencing the terror together. 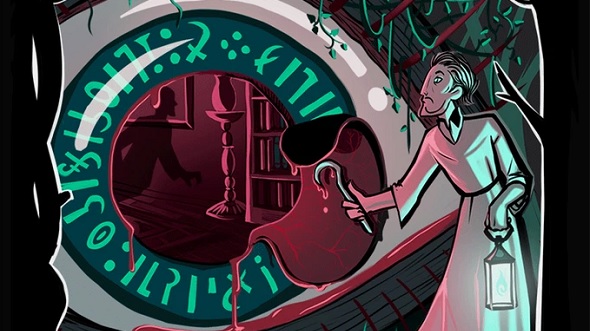 The idea is for you to study books of ancient lore as you pursue secret histories and unknown gods. You do this by combining snippets of texts into rites, crafting tools to perform rituals, and recruiting disciples to go on expeditions or sacrifice – it’s a cult after all. There are also policemen to waylay – or kill with help either hired or enthralled – relics to recover, skills to learn, and expeditions to undertake.

As with any cult, your beginnings are humble enough, but soon escalate with malice and insanity. Throughout all of this the cultist you play as is decidedly impersonal. No stats, other than the moniker given by the three starting points, are on show. You’re a nobody, just a name (that you can decide upon) with a job. You don’t even get to see their face as the game plays out as a view of a table with a single card and tile on it.

The card represents your employment while the tile is representative of the work you decide to do. The three current starting points are menial labour (with a likely turn into law), an idle scion supported by ailing Papa, or a medical practitioner at an Institute. Once you’ve chosen, you slot the card into the tile, wait out the timer, and then reap the rewards – this is the basic cycle of the game.

You soon unlock most of the tiles in Cultist Simulator with more spawning in to temporarily provide either boons or, more often, doom and gloom. Many cards are permanent, some aren’t. This is especially poignant with positive state cards that are all fleeting while negative ones always outstay their welcome. Cultist Simulator is described as a being a game of “apocalypse and yearning,” which plays out through its cruel systems of choice and chance. 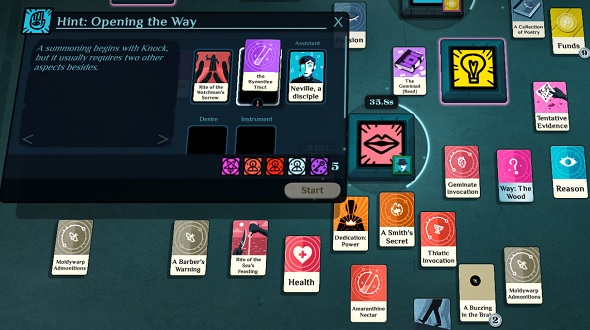 Be it no surprise, then, that your first few characters will likely die due to a failure in resource management. Fittingly enough, Despair will be the most notorious killer. It’s a tile that will end your character if it consumes three Dread and Injury cards without an equal number of Contentment cards to counteract them. But you’ll get better – or just lucky – and soon find that Dread is also a resource. Slot it into the Dreaming tile with a Contentment card and you receive a Reason card. Turns out that only a few of the negative cards can’t be turned into a boon in some way. Learning this begins your path towards the demonic.

Cultist Simulator isn’t not a finished product yet but what’s already in place is looking good. The cultist portraits emphasise a subdued art style that does well to support the fear of the unknown underlying the entire game, not to mention the flavour text on the cards, which are extremely evocative. It will give you the creeps as you try to grasp at the secret story of its world which you will probably then take into your maddened dreams.