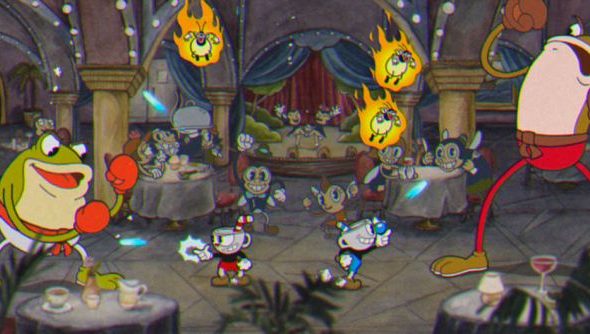 Cuphead – it looks gorgeous, but we’ve seen relatively little of it in action. Now, thanks to the marvellous, trailer-spewing wonder that is E3 2016 we get to see what is very clearly inexperienced players up against first a level, then a boss in the 30s cartoon-styled blaster.

For the unfamiliar, Cuphead is a bit like Mega Man only it’s set inside an up-rezzed version of the earliest cartoons and features a character whos head is, as you might have guessed, a cup. Up until recently it was to be a boss rush game, but now its expanded out to include normal levels as well, as seen below.

It’s actually the sound, rather than the graphics, that have me most happy. The clearly mouth-sounds gun noise, the brilliant soundtrack – it’s almost perfect. I’m a little more worried about how it might play, having found 2D side-scrolling platformers like this to be generally quite awkward since I stopped being able to ignore it through pure youthful ignorance. Bosses look a little repetitive too, but it will be more interesting when you’re actually in control.

There’s no solid release date yet, but it should be later this year unless it all goes horribly wrong. It’s hitting Xbox One at the same time as PC, being Microsoft-sponsored, hence why it gets a look-in at their shows. That means you can expect it in the Windows Store rather than Steam, too.