Boring and circular debates about difficulty aside, there was very little objectively wrong with Studio MDHR’s fantastic run-and-gun shooter Cuphead. Still, over a million sales means a lot of people poking at every nook and cranny of the game – something’s sure to break.

Reports have been collated, bugs have been identified and a few shortcomings have been spotted, and a chunky patch has been issues for the game. Check out the full v1.1.3 patch notes here, or our abridged picks within.

Cuphead’s 2-player mode can be great, but only if you and your buddy are on the same wavelength. Get your sync rate up in some of these other great co-op games.

Basic bug-fixes are top order for this patch. Some crashes and locks fixed, including some nasty problems that cropped up if you managed to unplug your controller during play. A weapon-swapping exploit has been fixed (no more high-power spam, sorry) and the Charge weapon is a little less powerful now, no longer making it the one and only weapon worth using for non-glitchy play.

Boss behavior has been fixed in a lot of cases, with enemies no longer going walkabout. King Dice has seen a few improvements, including his Start Over square becoming a one-off event, rather than a regrettably repeatable misadventure. The final boss has also received a couple buffs, as some of his attacks weren’t quite hitting as wide an area as they should. No longer can you evade his goat attack just by holding crouch. 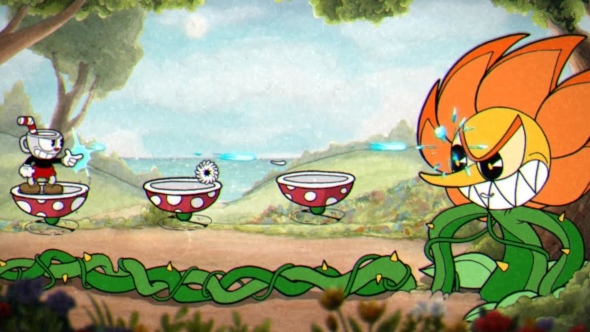 The Steam commenters seem to have spotted a few additional changes that didn’t make it into the full patch notes, too, with several bosses gaining additional parry targets during certain waves, which should give a little extra special attack power to help compensate for the speedrunning techniques lost in removing exploits and tweaking weapon damage.

It’s not all tuning and bug-fixing, thankfully. Studio MDHR have given the Mausoleum levels an appropriately spooky narrator, further improving on the retro cartoon vibe of the game. In a nod to slightly more recent (although still decades-old) classics, the Cagney Carnation fight gets a little extra wrinkle – the fuzzballs that he shoots during his final phase now pack an extra psychedelic punch, as seen in Yoshi’s Island back on the SNES.

One thing that a few Steam users have reported is that Cagney Carnations’ stretchy face attack comes out way faster than it used to, making it far harder to evade. Whether this is intentional or not is up for debate, but it doesn’t seem like a particularly fair change considering that it’s an otherwise relatively easy boss fight.

What say you, readers? Going back to Cuphead for another swig after this patch?