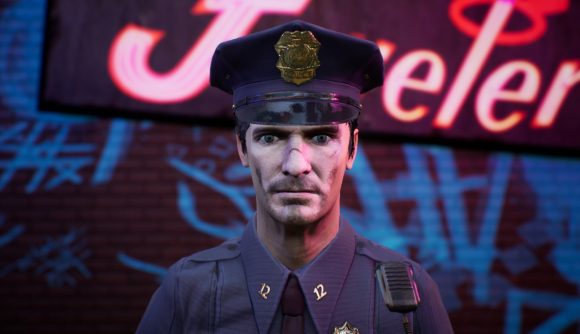 Steam doesn’t have high barriers to entry for its store, but there are some standards. You can’t, for example, encourage people to purchase, play, and review your game by promising to give them free copies of Cyberpunk 2077 as a “Christmas present.” You’d think that sort of rule would be self-evident, but apparently the developers of Cyberprank 2069 had to find out the hard way.

Cyberprank 2069 was only briefly available for sale – at a price of $9.99 – but the (now archived) store page describes it as “a sandbox game. True simulation of life in the world of the future,” and alternately as “a complete idiocy. You just walk along few streets and communicate with different people, mostly drunk robots in business suits.”

The SteamDB archive of the game shows plenty of changes to the store page over the past week, but as PC Gamer notes, this is the relevant bit: “Thanks to everyone who bought this joke game before 22/07/2019. Each of you will receive your copy of Cyberpunk 2077 as a Christmas present. The funniest review will win collector’s edition.”

As the game is now delisted from Steam, you’re probably not getting your copy of Cyberpunk. (But then, you probably didn’t have a chance of getting it at all.)

If you want a taste of the magic you’re missing out on, the trailer is still available above. It promises a cast including Rutger Hauer (RIP), Brad Pitt, Keanu Reeves, Ryan Gosling, and Leonardo DiCaprio. Obviously that’s supposed to be a joke, but I’m not really clear on what the joke even is.