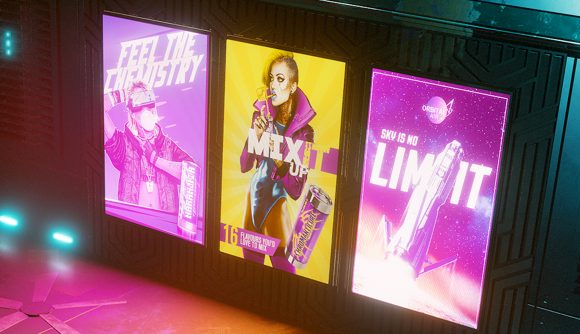 A new Cyberpunk 2077 screenshot released this week was intended to show off the game’s ray tracing support, but one particular detail caught a different sort of attention. An in-game soft drink advertisement in the background says “mix it up.” That slogan is accompanied by an image of a female figure in a revealing bodysuit, and the exaggerated outline of a penis is clearly visible through the clothing.

Concerns have been raised over the image from a variety of angles, asking whether it’s a joke at the expense of transgender people, or if it’s an attempt to satirize the idea of corporate interests commodifying trans bodies. Some have found it difficult to give CD Projekt Red the benefit of the doubt after social media gaffes referencing transphobic jokes.

According to art director Kasia Redesiuk, the ad is indeed meant to represent the overreach of advertising from dystopian megacorporations. “Hypersexualization is apparent everywhere,” Redesiuk tells Polygon, “and in our ads there are many examples of hypersexualized women, hypersexualized men, and hypersexualized people in between.

Redesiuk adds, “I think that sexy bodies are sexy. Full disclosure: I love female bodies. I love male bodies. I love bodies in between. This is who I am. However, I hate it when it’s used commercially. And that’s exactly what we want to show by doing this, by showing how big corporations use people’s bodies against them.”