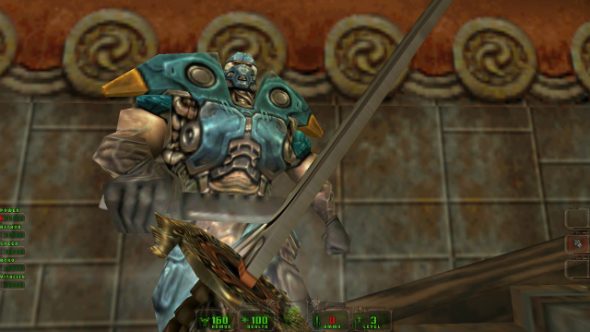 For a high-level videogame maker, the late 1990s were an intense period. Half-Life and Metal Gear Solid were both on the shelves and both implied, the former subtly and the latter explicitly, that story and characters should  play a central role in action games. At the same time Quake and Quake II were encouraging players’ appetites for big spectacle and immaculate shooter design. Trying to keep up with these two sensibilities, one emerging, one being perfected and redefined, must have been challenging.

Looking for a stronger recommendation from yesteryear? Try these great old PC games.

The infamous poster for Daikatana, which told every prospective buyer they were about to be made a “bitch,” and to “suck it down,” was not the idea of the game’s director John Romero. According to David Kushner’s book, Masters of Doom, it was created by Mike Wilson, CEO of developer Ion Storm. In the 17 years since the game’s release, Romero has said he was reluctant to approve the advertisement and now regrets it. If the criticism of Daikatana is often directed squarely at Romero himself, that poster, at least, should not be. 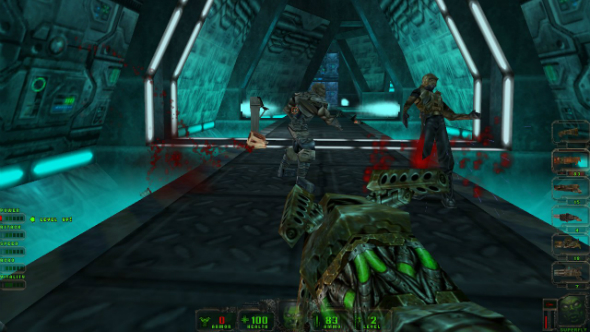 Nevertheless, these two disclaimers must come with caveats. The late nineties certainly were perilous for game-makers, but copying from other successes as Daikatana does so consistently is a lame attempt at keeping up. Its advertising campaign might have been poorly judged, but Daikatana, as you play it, is outright obnoxious and hubristic. When you quit to the main menu, it asks “Are you broken?” When you collect a health pack, you receive an admonishing pop-up: “You needed the health pack.” One might argue that such petty machismo played better in late nineties and early noughties than it does today. Judging by Daikatana’s initial reviews and the reputation the game has earned since its 2000 release, though, clearly it didn’t go down well then either – in hindsight, the one thing truly stinks about Daikatana is its attitude.

The opening levels don’t help either, though. “Swamp” and “sewers,” alongside maybe “depot” and “escort mission,” are two of the most unenthusiastic tropes in shooters. After a lengthy opening cutscene, which drags maybe thirty seconds of narrative set-up over 10 minutes, Daikatana opens proper on lifeless grey-green pool, right out of Half-Life’s Xen, in which you shoot robotic frogs and crocodiles. Your first gun, the Ion Blaster, has an annoying splashback damage effect, which precludes close-range combat. Picking off androids from a distance, while you navigate obtuse, alien landscape, is hardly an explosive beginning. 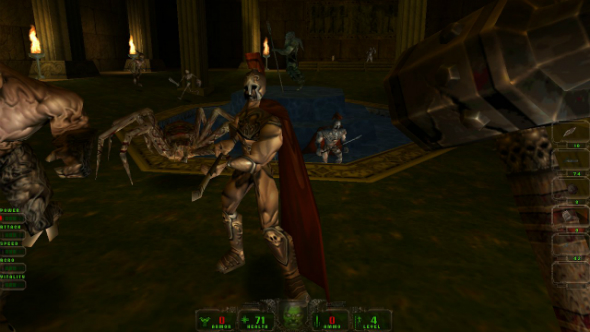 Things improve as Daikatana continues. Its introductory missions, set within a futuristic Japan, segue into a variety of times, places and aesthetics. Fighting ancient Greek warriors using a trident, or Dark Age villagers with a clawed glove, represents a quantity of tonal and mechanical shifts that even shooters of today rarely achieve. There is determination, on behalf of Daikatana, to keep things moving and introduce new foes, new guns and new surroundings. And a lot of the time, it works. The Ion Blaster is a fussy first weapon, but combat generally is plentiful and tactile – rather than dozens and dozens of enemies, the challenge, largely, is surviving against tough, capable individuals. When the game reaches its climax and introduces guns like the Glock 2020, it starts to feel, for the first time in its entire duration, grounded and focused. That pistol illustrates how, with fewer unnecessary, often malfunctioning gimmicks, Daikatana can be a gratifying first-person shooter.

But regardless of its ambitious – or rather, imprudent – design, Daikatana is not a brave game. Instead, it feels like a ‘me too’ emulation of whatever was big at the time. The protagonist, Hiro, sounds a lot like David Hayter’s Solid Snake; the levers, cranks and sewer pipe navigation come from Half-Life; there are several knowing winks to the original Doom and of course the whole thing is built using the Quake II engine. 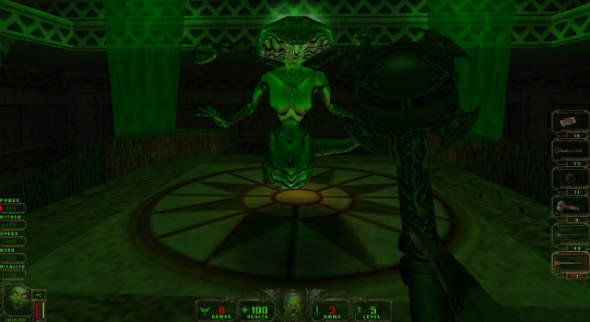 Even the original Deus Ex, developed at Ion Storm’s brother company in Austin and released around the same time, seems to have crept in. Daikatana’s earliest missions, set inside a cyber-punk future where the world is recovering from a mysterious plague, smell very strongly of UNATCO, JC Denton and the Gray Death. For all its bravado and cockiness, to which the celebrity around Romero must have contributed, Daikatana is a very safe experience next to its contemporaries.

And yet it’s far from a bad game. Innumerable articles about its ugly production process, late release and subsequent bearing on the closure of Ion Storm Dallas have made Daikatana the go-to horror story for gaming aficionados, but when you actually sit and play it, it’s far from unenjoyable. Its AI companions are a well-documented bane and the dingy colour palette is enough to bore even modern game players raised on the browns and dark greens of Gears of War, but the gore is plentiful, the puzzles are both mentally undemanding and satisfying to complete and it’s consistently, intentionally funny. 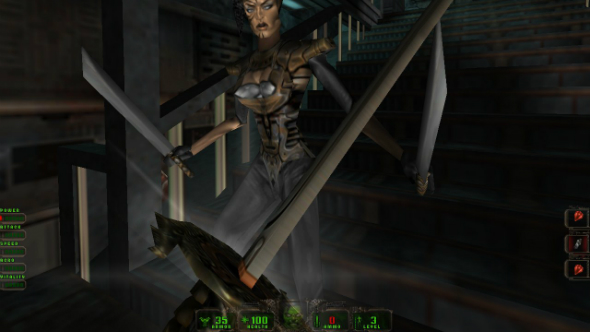 In other words, Daikatana has a loud mouth but a good heart – it illustrates a grade of creative brio often absent from present day shooters. The story takes some surprising turns and there’s a palpable sense of excitement on behalf of the makers – these people, who were fated for infamy, just wanted to take you on an adventure.

But by 2000, other games had already done it better. Paradoxically, if Daikatana hadn’t failed, it’s unlikely anyone would remember it today. Because when it’s experienced outside that historical context, it’s a fine shooter that plays like numerous others of the time. If it demands to be replayed and re-examined for any reason, it’s only because of its reputation; because it incurred such wrath for falling behind schedule and over budget back in its day.

Daikatana is not as bad as you’ve heard. It’s bloody. It’s bold. In various ways, it’s a lesser version of Half-Life, or Quake, or Doom, or Wolfenstein. More tragic than its enduring, monstrous reputation is the reality of Daikatana. It’s a game that’s average for its time, seemingly borne from the basest instincts in the business: to keep up with the competition and give consumers what they want. By all means play it. But after you’re done, you’re unlikely to think of Daikatana ever again.