With the opening two hours of Dark Souls 2 under our belt, you’ll likely be unsurprised to hear that the bulk of that time was spent dying, respawning, dying and trying again. Welcome back to the realm of sadistic design for the masochistic player. As third-person, melee-biased RPGs go, this is not going for everyone.

Journeying through Dark Souls 2’s Drangleic feels like a warped reflection of what we’ve already seen from Dark Souls’ Lordran and Demon’s Souls’ Boletaria. You’re still up against when it comes to staying alive and fighting enemies, just as much as you are when it comes to figuring out a route through a world with no help from signs, maps or the few NPCs not thirsting for your blood.

It’s no exaggeration to say that half of my two hours were spent backtracking and trying to figure out just where I was and where I’d already been. To make matters worse, in typical ‘Souls’ series fashion, you’re not even told who you are or where you’re going. Knowledge, if you can uncover it, should be treasured.

To make things even more difficult, Dark Souls 2 features a new approach to health that sees your bar shrink each time you die. Numerous deaths can result in it dropping as low as 50 percent of its normal level, presumably making the kinds of unexpected boss battles that no doubt await deeper in the game even more arduous.

Further complication is heaped upon those who have garnered a high sin level from invading and killing other human players via the dedicated servers (finally), their health potentially dropping to as low as 10 percent as punishment.

To aide you in your bid to stay alive long enough to see that first boss and uncover enough info on the world to provide a vague sense of perspective, slight refinements have been made to how some combat elements and character classes work.

Having tried the new dual-wielding class it’s abundantly clear that it’s an approach suited only to those with the patience and inclination to forget any skills the series has taught you up to this point. Without a shield you’ve no fallback option for performing a mistimed lunge or falling victim to a sneak attack. Constant motion and a mind capable of intimately memorising an enemy’s attack pattern are your only means of defence, and even then you’re going to want to keep the health restoring Estus Flasks close at all times. 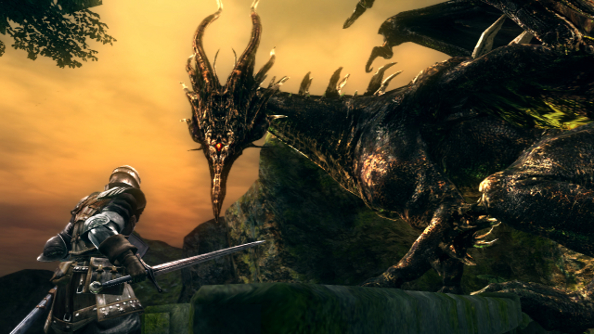 On the plus side, the option of equipping four rings (up from Dark Souls 1’s limit of two) provides more room to buff and personalise your stats in a way that reflects your playing style. There’s even the option of completely overhauling any ability points you’ve assigned if you possess the item allowing you to do so, something likely to sound blasphemous to those who have enjoyed the series’ merciless approach to frivolous spending in the past.

Still more controversial is the new option of in-game voice chat between players that have entered each other’s games. Developer From Software has held a desire to create ‘loose connections’ between players in an attempt to retain that feeling of individual struggle and progression, but direct communication sounds very much like an attempt at ‘direct connections’.

Without actually testing the feature first-hand, though, it’s unfair to congratulate or condemn From Software for such an inclusion.

It’s easier to congratulate them on the fact that they seem to be working harder to produce a PC version that’s at least the equal of the console releases, something that Dark Souls 1 got nowhere near to achieving.

Namco Bandai producer Takeshi Miyazoe confirmed to us that “graphics will be highly improved for people with high-spec machines” and that that will include “increased resolution options”. What he was unwilling to guarantee, however, was whether the PC version will see an improved frame rate over the console editions. Probably a good idea not to use it, then. While there are changes to how Dark Souls 2 operates in comparison to the previous game, the overriding sensation following those two hours wandering gloomy corridors and engaging in the series’ trademark back-and-forth combat was one of familiarity. The health system, perhaps above all else, is likely to have an impact on how you play, but only after hours of exploring will that really come into its own as a differentiator from one game to the next.

The cliché here, of course, is ‘if it ain’t broke, don’t fix it.’ Normally, that isn’t a phrase with much meaning or resonance. But, in the land of souls, things are already complicated enough to expect players to accept and learn wholesale new ideas and approaches. The challenge for Dark Souls 2, then, is to be attractive through familiarity, without being boring through replication.