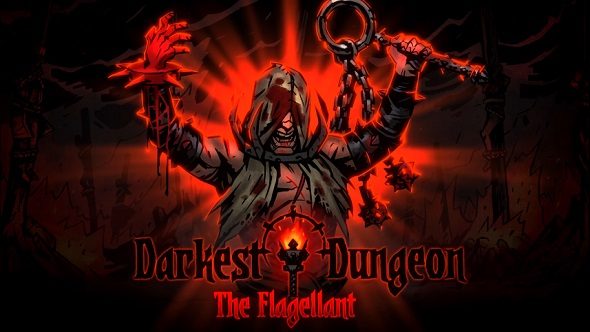 Named the Flagellant, this hero can heal allies and damage opponents by causing immense pain to himself. Due to his self-punishment, the Flagellant requires immense skill to play, as being too furious with the cat-’o-nine-tails will result in your hero ending up in an early grave.

Prepare for a scare with this list of terrifying PC horror games.

As he is constantly torturing himself to gain power, the Flagellant is almost always at high stress levels. To account for this, he only ever receives one Affliction. Called Rapturous, the Flagellant enters a state of exquiste agony and ecstasy where he deals terrifying damage to both enemy and friendly targets, so beware of being teamkilled.

Speaking to PC Gamer, Red Hook stated that the Flagellant is “on par with the Abomination” in terms of technical complexity, so don’t add him to your roster if you’re just starting out with Darkest Dungeon. The Flagellant does receive some major bonuses when he is on Death’s Door, with his pain resistance allowing him to stay on the edge of death much longer than other classes.

If he does kick the bucket, the Flagellant unleashes the last of his holy fervour to heal his friends, while also stunning and damaging enemies. It’s painful to lose any hero in Darkest Dungeon, but maybe let your Flagellant soak up that deathblow to give your party a second wind.

Original story May 27, 2017: Enticing players to return to its dank depths, developer Red Hook Studios have revealed a release date for Darkest Dungeon’s first expansion. TitledThe Crimson Court, this DLC sees players fighting off vampires and all sorts of blood-sucking abominations in a brand new location.

Coming on June 19, The Crimson Court adds the new Courtyard area to Darkest Dungeon’s four existing environments. An estate much like the player-owned Hamlet, the Courtyard was overtaken by the mysterious Crimson Curse which causes humans to thirst for blood. It’s your job to expunge the curse from the ruined estate, while also stealing any treasure that hasn’t been bolted down or hexed by some eldritch magic.

Along with a new wandering boss called the Fanatic, The Crimson Court introduces a new character class to the roster of 15 heroes. Red Hook have been keeping details of this hero close to their chest, only revealing cryptic hints that state that the new hero is “awash in blood and delusion” and that “they bear the burden of a thousand lifetimes.” By the sounds of it, this new fighter is someone afflicted with the Crimson Curse, but now wants to fight back against its corruption. Expect a class that focuses heavily on Bleed skills and who may also have some kind of lifedrain ability through sucking an enemy’s blood.

The Courtyard’s dungeons are some of the largest seen in Darkest Dungeon, with locked doors and even prisoner rooms which adventurers can open. I imagine these prisoners will either join your party as new fighters or go back to the Hamlet to help its growth. Knowing Red Hook, though, some of these prisoners will trick you into freeing them and then try to steal all of your loot.

The Hamlet has also received a make-over with the addition of Districts, which allow players to build new buildings which apply buffs to everything on your estate. These constructions will no doubt be expensive, so save up your hard-earned cash if you want to commission one of these upgrades.

The Crimson Court is priced at $9.99 on Steam, with it launching for PC/Mac/Linux on June 19.