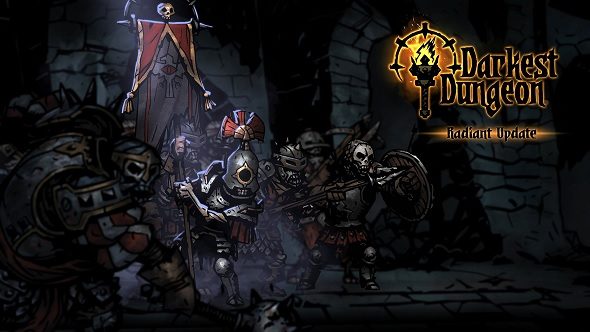 Previously announced with their “Hamlet for the Holidays” update, Darkest Dungeon developer Red Hook Studios have released more information on the upcoming Radiant Mode for their sadistic dungeon crawler. While not acting as an ‘easy mode’ for the game, playing Darkest Dungeon on Radiant Mode does allow explorers to complete the game that little bit quicker.

Keep the spooks coming, with these great PC horror games.

The main goal of Radiant Mode is to reduce the time it takes players to form that crack team of fighters to assault the titular dungeon. At present, Red Hook’s current goal is to get that completion time down to about 40 hours of playtime, but extensive internal playtests will determine if the mode meets this goal. With the addition of Radiant Mode, there are now three game modes that adventurers can choose from: Normal, Radiant and Stygian (which is the suitably Lovecraftian name for New Game+).

Along with this new mode, Red Hook are planning to add new Champion Monsters in the Radiant update. These monsters will have “insidious, never-before-seen abilities”, appearing in Champion Dungeons to make those last few levels that bit more excruciating. There will be four of these Champion Monsters, one for each zone and the first announced fiend is the Bone Bearer, a shuffling horror that can revive enemies from corpses and rally fellow demons by raising its standard. Watch out for this armoured abomination when exploring the Ruins.

The Radiant update is planned for early February, with Red Hook looking to release a small public beta beforehand to make sure all the new changes are rock solid before launch. Due to the growing size of the Radiant update, Red Hook have been forced to push back the Crimson Court DLC to April. Much of the work on the Crimson Court is finished, it is just a matter of shining up the bloody ballrooms for its new arrivals.