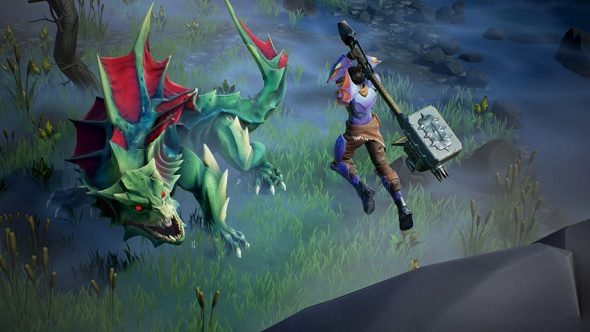 Following its initial trailer at The Game Awards a few weeks ago, action-RPG fans have been questioning the feel of combat in Dauntless. Hoping to answer some of the questions surrounding its systems, combat designer Chris Fox has released a short trailer and accompanying blog post, following the design process of Dauntless’ combat.

For free to play games, look no further than our gargantuan list of 100 top F2P PC games.

As it is an action-RPG all about slaying massive monsters, Phoenix Labs went to the greats of the genre in order to find the foundation for Dauntless. Taking inspiration from games like Monster Hunter and Dark Souls, alongside Bayonetta and Devil May Cry, Fox and his design team wanted to make sure that every hit felt impactful. To that end, they broke down the act of hitting something into four main parts.

First off, is it fun to just swing a weapon around? By adding subtle screen shakes and visual trails whenever you swing your weapon, it makes just the act of flailing about fun, acting as a decent foundation for when you start actually hitting a monster.

Second, how does it feel to hit a stationary target like a rock? With hit stop and some directional impact effects, animators can convey the strength of a weapon as it hits a solid object. If the hit feels meek against something as solid as stone, it’s going to feel even worse when hitting flesh.

Thirdly, what is the monster’s reaction to a weapon hit? If you’re swinging a giant battleaxe, a beast should recoil in pain but if you’re using a nimble rapier, a lumbering behemoth should be able to shrug off a blow no problem. Matching the right reaction to a successful hit really sells the feel of a certain weapon and when your game centres around combat, it needs to feel rock solid.

Finally, it’s a matter of putting it all together with combos, stagger states, guard breaks and so on. To make sure that you aren’t just swinging a two ton axe round willy nilly, Dauntless has a stamina system, similar to a game like Monster Hunter or Dark Souls. Bigger weapons use up more stamina, with players having to balance their attacking stamina usage with their evading stamina usage. You could use all of your stamina on a super powered overhead axe strike, or you could leave some stamina available to cancel out of an axe charge, should you see a monster rearing up.

Based on the short pre-alpha footage, Phoenix Labs seems to be going in the right direction. The way you fight with an axe is incredibly similar to Monster Hunter, complete with a three-phased charge system to determine the strength of the swing. It looks suitably weighty with my only problem being the lack of response from the monster being attacked. Dauntless still is in pre-alpha, so much of the animations are subject to change.

Scheduled to release sometime in 2017 for PC, Dauntless is free to play and you can sign up for the beta right now by going to the Dauntless website. Expect more design videos and blog posts in the future as development continues.