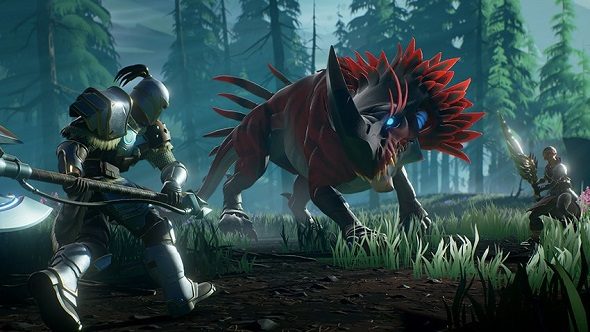 Showing the process of how Slayers turn that newly-slain behemoth into a shiny flame sword, developer Phoenix Labs have released a new trailer for free-to-play RPG Dauntless. Along with the forging process, this video finally gives players a look at Dauntless’ hub-world of Ramsgate.

Check out our interview with Phoenix Labs president, Jesse Houston.

Rather than focusing on combat, this footage outlines how players will need to forge new armour and weapons to take down specific beasts. After being defeated by a Skraev, a behemoth which controls ice, this band of Slayers then goes on the hunt for the fiery Embermane to forge equipment that is strong against ice.

After felling this creature, the hunters return to Ramsgate to forge some brand new weapons and armour, made from parts harvested from the Embermane. Now imbued with the power of fire, the Slayers are able to kill the icy Skraev and craft a new set of frost armour from the remains of this behemoth. Much like Monster Hunter, exploiting elemental weaknesses is key for defeating some of Dauntless’ tougher behemoths.

While the trailer doesn’t show the specifics of forging new equipment, it outlines the basic gameplay loop of fighting monsters to make new equipment to fight more monsters. The footage also shows what Ramsgate looks like in-game, but it gives very little away about the overall scope of the city. It does at least outline how players go to and from missions, by hiring special airships to drop them at specific locations on the Shattered Isles.

The Chain Blades weapon class is briefly shown in the trailer as well, acting as a weapon which works at both close and long range, thanks to its arcing chain slashes. Still no evidence of ranged weapons like bows or guns in Dauntless just yet, but we’ll hopefully see footage of those at E3.

If you’re interested in giving Dauntless a try, sign ups for the closed alpha are still open. Its closed beta is set to launch in autumn, with players being able to buy into that round of testing by purchasing a special Founder’s Pack.