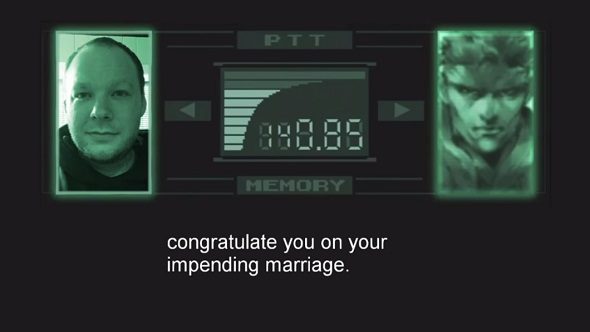 We might all be used to the fact that Kiefer Sutherland is now the voice of Metal Gear Solid’s Snake, but next to David Hayter he feels like a clone, a pale imitation. In our hearts, it’s Hayter’s gravelly voice we’ll remember as Snake, not the almost mute Boss from Metal Gear Solid V.

If you’re feeling nostalgic, check out our list of the best old games.

One lucky Metal Gear Solid fan happened to meet David Hayter at a convention and got chatting to him. One of the fan’s friends was getting married, and they had an idea.

They asked Hayter to record their pal a message in the style of a Metal Gear Solid codec call and congratulate him on the wedding. Hayter obliged.

The friend then got together with their pals and edited it all together into a video copying the classic MGS codec and it’s just perfect. Have a watch of it above if you don’t believe me.

He even signs off with: “You kept her waiting, huh?” What a boss.