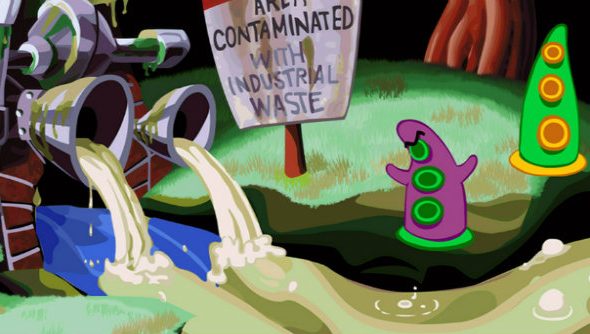 The sexier, HD-ified remaster of Tim Schafer’s time-hopping adventure, Day of the Tentacle, lands on PC in a fortnight, on March 22.

While you’re waiting, check out the picks in our list of the best games on PC.

Day of the Tentacle Remastered’s launch date was announced on GOG.com. It’s the full adventure game you remember, but it won’t look horrifying on your shiny HD display, although there will be the option to switch between the new high-res visuals and the original pixel art.

It also has remastered audio and a fully-reworked user interface, as well as a few extras including in-game developer commentary and a fully playable version of the original Maniac Mansion.

You can pre-order it on GOG now with a 10% discount.

Here’s a message from the lovely Tim Schafer: