I watched from the bushes. Two heavily armed bandits, picking clean the corpse of a survivor. After they walked a ways down the road, I moved in to take a look.

There was some valuable loot that they had ignored: some rags, a screw driver and a bright blue backpack. Not exactly unobtrusive, but the extra storage was a must.

I don’t recall hearing anything, but I remember feeling it. I turned around to the barrel of a M4 pointed directly between my eyes. I froze. It was one of the bandits from before, standing there. Silent. I waited for some sort of interaction, a gesture, a sound or my likely death. Instead he simply lowered his gun, and walked away.

A million questions raced through my mind. Why I was I spared? Was it an act of kindness? Maybe his friend was in trouble?

I wasn’t spared. It wasn’t an act of kindness. His friend was not in trouble. That friend was stood behind me the entire time with a fire axe. I simply wasn’t worth a bullet. 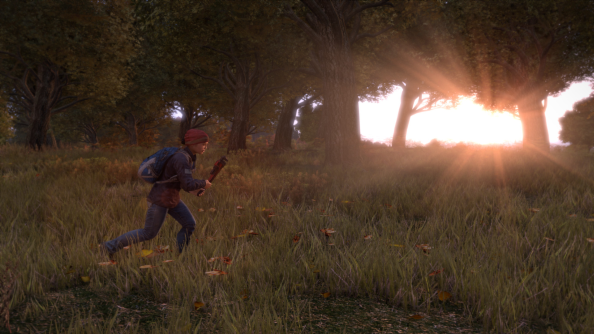 Set in an post apocalyptic world, DayZ takes place in Chernarus. The environment is mostly sparse and rural, with a few big towns near the coast. Civilization is nearly nonexistent, instead populated with mindless zombies from an unexplained catastrophe. The players are all that’s left, tasked with only one objective: survive. Similar to CCP’s space MMO, EVE Online, DayZ takes a hands-off approach which allows the players to create emergent situations. Everything is on the line, where a single mistake can cost you your life, and send you back to the beginning empty handed.

Lets talk about what the standalone brings to the table over the mod. The entire map, all 230 km² of it, has been polished up, adding more detail to the world of Chernarus. Most, if not all of buildings can now be entered, with loot scattered and tucked away in the cupboards and bins you’ll find inside.

The inventory system has been completely redesigned. You can kit out your survivor with a number of clothing, each having various degrees of inventory space. It’s also been simplified to a drag-and-drop system: it’s easier to use but doesn’t reduce complexity.

Items now have damage statuses which can determine their effectiveness. A ruined scope might have a cracked lens, as well as other faults. You might find yourself compensating because shots veer to the right, for instance. There’s a positional damage system that impacts on the equipment the player is carrying. Shooting players has a high chance to damage their equipment. That should hopefully disincentivise the “kill on sight” mentality. 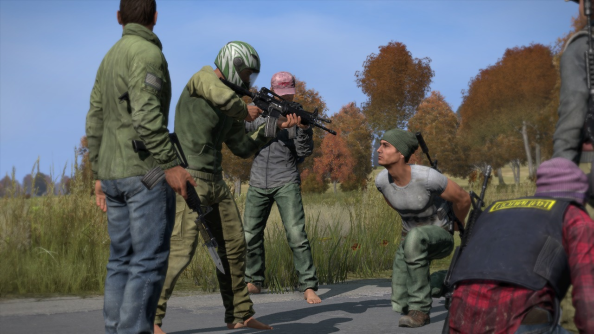 DayZ has always been a lucrative source of anecdotes. A player might beat the odds and get some sweet justice on some bandits, another might find his way out of a sticky mugging attempt, or maybe some like to don vigilante personas and keep their fellow survivors safe on the streets.

It’s these volatile encounters that drive DayZ. Their outcome depends entirely on the mentality and goals of the people involved. People have one thing in common however: they all want to survive. I’ve met and teamed up with random survivors before with very mixed experiences. Some will defend you till the death, others will lure you into a trap. I’ve even traveled with two others for a number of hours, only to be axed in the back the moment a disagreement arose.

It makes DayZ an unusually tense and odd experience: you’ll repeatedly feel your fight or flight instincts kicking in at a moment’s notice. 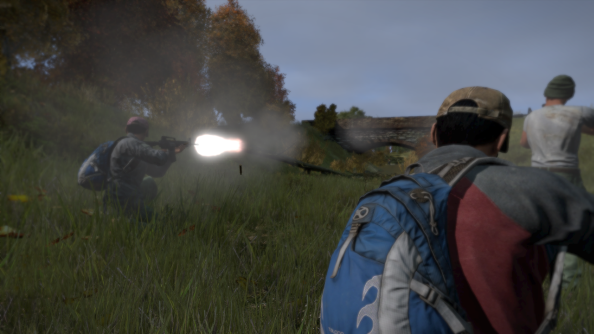 DayZ is still in early alpha. While the mod catapulted DayZ to the recognition it deserves, there’s a reason DayZ is being rebuilt to stand on its own two feet. The team responsible actively advise you not to buy it right now.

Features that are present in the mod today might not be in the standalone. Zombies are sparse, there are no vehicles and firearms are of limited variety. There’s also bugs. Zombies can sometimes walk through walls, rabbits make zombie sounds and ladders can be more deadly than a fully armed bandit.

Performance can vary. I’m running a GTX 580 and a i7-2600k and can maintain 60FPS with most of the settings turned to max (post-processing and ambient occlusion turned off). Right now most public servers are restarting every 3-4 hours, without warning, to respawn loot. This also has the side effect of a perpetual state of daytime.

Does this ruin the experience? No.

With the monumental success of the standalone already, the team are already re-evaluating their roadmap of features. The devs constantly communicate with the community too. I’ve seen some in-game, watching streams and floating around the forums. 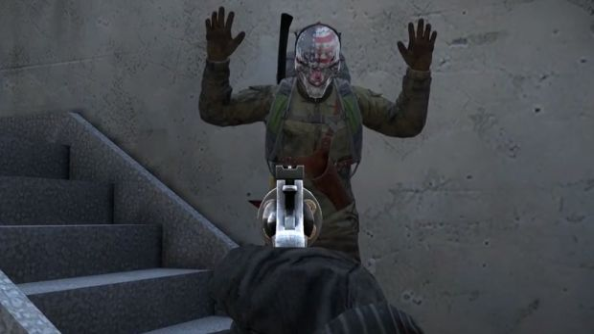 This version of DayZ might be unfinished, it might be a work in progress. The alpha might well last another year. But playing it is like nothing else: it is survival role-playing writ on a scale that just hasn’t been possible before. If you can cope with the bugs, you should ignore Bohemia’s advice and leap in, both feet first. DayZ is the best survival game I’ve played. And it’s only going to get better.