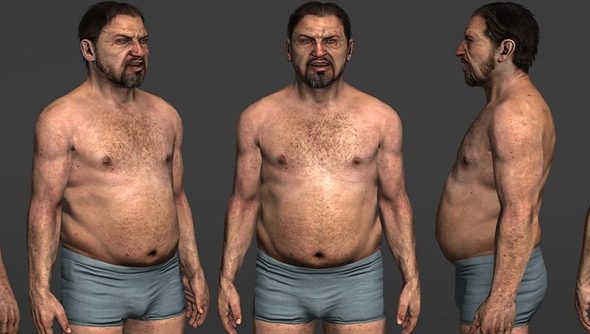 DayZ art lead, Chris Torchia, has given players a sneak peek at his current work-in-progress project. The task itself will enable the artists to endlessly customise new varieties of zombies, not only changing the clothes they wear, but also their body shapes too. The best part of it, is it’ll have little to no impact on performance if a player sees a horde of zombies at once.

The WIP zombie above wants “your brains in his belly” according to Torchia.

If you’ve ever come across DayZ’s local inhabitants, you’ll notice there’s a little variety when it comes to your undead neighbours. Some crawl after you with ferocity, while others shamble towards you at a leisurely pace.

In the future, zombies will originate from a new “zombie template”, which will allow the artists at Bohemia Interactive to really ramp up unique models.

“Many of you have heard of the zombie templates.” said art lead Chris Torchia. “The plan with these is to produce a zombie ‘doll’ which we can have an artist dress up with various survivor clothing and bake to a single texture on an optimized mesh. This would increase the amount of visual variety without impacting performance if/when players see large amounts of zombies at once in the scene.

“This approach also creates an opportunity to introduce some degree of variety to the zombie bodies, themselves.“

The new method, coupled with the new renderer, will certainly help with keeping players immersed, by reducing the chance of seeing zombie clones. But who’s to say this couldn’t be used in the future to make some unique zombies, with unique traits?

What do you want from DayZ’s zombies?