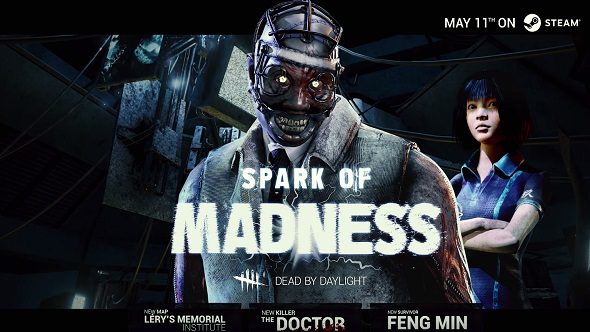 In front of you stand an esports pro and a doctor with a fondness for electrotherapy – can you guess which one is the murdery one and which one is trying not to get murdered? If you figured the skinless doctor with an eye-clamp on his head was the killer, well done. You win. Give yourself a pat on the back.

Our list of the best multiplayer games will get your heart racing.

Herman ‘The Doctor’ Carter is the new murderer in the latest DLC for the 4v1 multiplayer slasher sim. He looks like he could do with a nap, to be honest, but instead he’s out hunting down teens as they try to fix up generators in the new Léry’s Memorial Institute map.

The Doctor can also sabotage the generators, meaning the survivors have to endure an extra quick-time event to get them going, all while the killer stomps ominously towards them. He also has an aura surrounding him that can make survivors mess up, too. Basically, you’ll want to stay away from the dude.

Spark of Madness is out now and it’ll cost you $6.99, though there’s a small discount at launch. Have a watch of the trailer above.