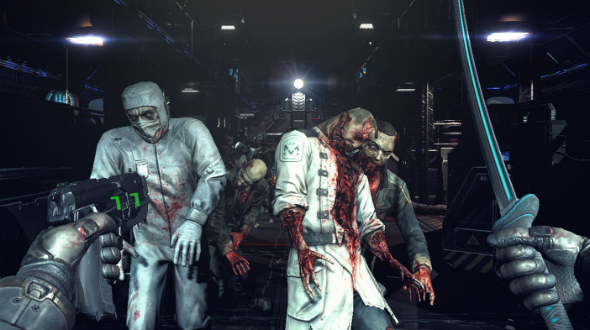 What’s better than slaughtering flesh-eating creatures with flamethrowers, shotguns, and samurai swords? Doing it in VR, obviously. Dead Effect 2 VR entered Early Access on June 7th so you can get closer than ever to the series’ compelling first-person violence. Get those zombies all up in your face!

Dead Effect 2 VR was built from the ground up for the new platform, with VR-optimised controls, weapon dual-wielding, and improved weapon models. It’s no shoddy port. Which means it should not only entertain as you blast away the horrors but also scare you silly like only VR games can.

You need to make your way through an infected corridors of a colony spaceship in Dead Effect 2 VR, relying only on your wits to survive. Yes, you’ll have guns, but they’re only as good as your physical body movements are. React slow or fail to turn your head to check your flank and you could find yourself dead faster than a pack of zombies can chew through a corpse.

Luckily, you do get abilities to upgrade your character, one of which is bullet-time, so you can temporarily slow down time. An alternative option is to grab the force field power that cloaks you in a protective shield for a little while. While Dead Effect 2 VR is in Early Access, it already comes with a ten-hour single-player campaign. It also has four additional game modes: Biohazard, Survival, Lone Wolf, and Infestation.

It’ll get future updates that’ll add another ten hours to the campaign, a bigger arsenal of weapons, and cooperative play. Not to mention an eight-player online PvP battles with all the classic deathmatch modes.

If you’re chomping at the bit to get your hands on Dead Effect 2 VR then you’re in the right place. You could purchase it for $19.99/£14.99 on Steam, or you could enter our giveaway and win one of the 20 copies of the game we have.All you need to do is enter via our widget below. Every action you complete is worth one entry into the giveaway, and the more actions you complete the more chance you’ll have of winning. We’ll also need your email address so we can send you a code upon winning – we won’t send you spam, we promise!