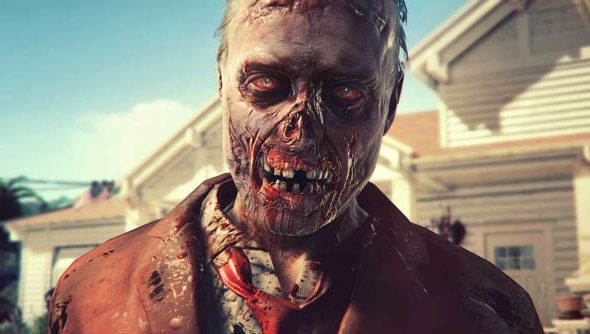 Dead Island 2 doesn’t cheat. You can see it in the views: long sweeping eyelines of zombie infested Los Angeles, the seamless strolls from the Hollywood sign in the hills, all the way to Santa Monica beach.

Rewind three years. Yager Development, based in Berlin, were finishing up development on Spec Ops: The Line, a Heart of Darkness-inspired cover shooter that took an unflinching look at how little violence in games affects gamers. The team needed something a lighter to play during their downtime. They found themselves kicking back in Dead Island, an exceptionally silly open world zombie survival game set on a luxury tropical island resort.

When word reached them that Techland, Dead Island’s developer, wouldn’t be making a sequel, Yager approached publisher Deep Silver with their own idea. “We knew what we liked about Dead Island,” Yager’s senior gameplay programmer Isaac Ashdown tells me. “Our pitch was to take the key feature set and the tone of the experience you get, especially while playing co-op, and thinking what does next gen allow us to do?” 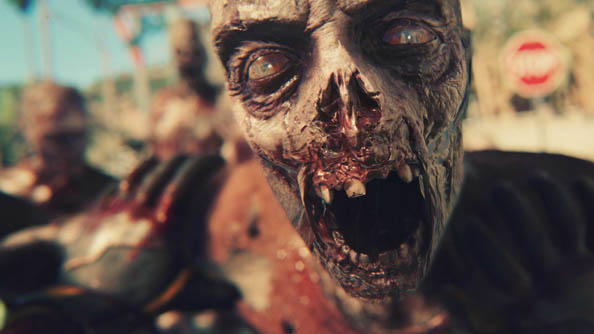 What they built is a game that uses modern hardware and Unreal Engine 4 to throw out the limitations that we’ve accepted in open worlds.

That’s partly thanks to Unreal’s ability to seamless stream areas in and out of memory.

Open world games aren’t created out of one large map. They’re patchworks of maps stitched together. As you explore, the game engine loads that part of the world into memory while simultaneously unloading the areas behind you. Streaming the world means that game you won’t see a loading screens while playing.

However, till now it’s had some obvious side effects.

“In the previous gen you may have noticed as you walk through levels that there was a lot of times when you were in ‘Streaming Corridors’,” Ashdown recalls. “There’d be some narrative reason why your character wasn’t allowed to run and you were walking through a couple of corridors with a dogleg in it.”

Think about the long bridges between GTA IV’s islands, the linking corridors between Halo’s big outdoor battlefields, and Skyrim’s narrow mountain paths. Each one was cleverly placed to hide a load point. “What’s happening there is the previous level is being unloaded and the new level is being loaded in,” says Ashdown. 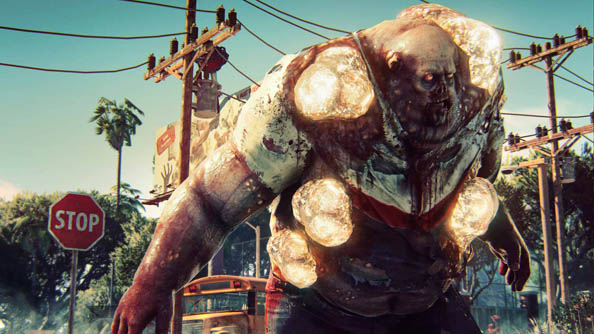 Streaming Corridors were a necessary evil of the previous generation of hardware – “it was only so fast and had so much memory.” That’s not the case with the new console generation. Developers are now able to take advantage of hardware that’s been in desktop PCs for years.

It also helps that Yager have had access to Epic’s Unreal Engine 4 and its World Composition tech for the past two years. “It’s a system whereby you can stitch levels together in the editor, setting up the way they stream in and out without loading screens. We’ve actually worked a lot with Epic on it, we’re one of the only studios as far into development that’s using it for consoles. A couple of other studios are using it but only for PC games.”

World Composition doesn’t work like a patchwork quilt. Instead of having a map broken up into self-contained chunks that are loaded in and out of memory you have levels of detail that are streamed in as they become relevant.

In the Dead Island 2 demo Yager take to trade shows, players can trek to the top of the Hollywood Hills and “look down and get a really nice panorama of LA, all the way down to the ocean with Santa Monica pier in the distance,” explains Ashdown. “When you’re at the top of the hill there’s a much lower level of detail being displayed to you. That’s the point with level of detail, you only need to see enough to make it to look pretty. You don’t need to see all the little tiny zombies, from that distance that’s not important. Only once you get closer does it stream in the higher levels, and the highest level is populated with zombies.” 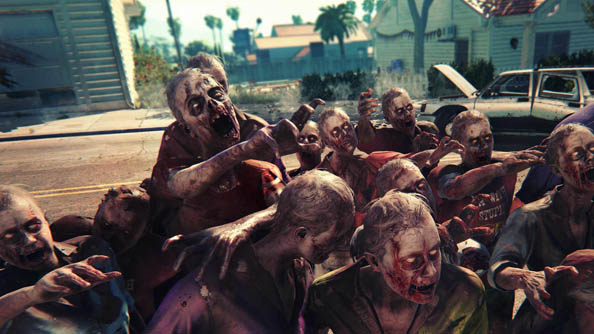 The technology frees level designers. Yager don’t need to plan their cities to hide sightlines, they don’t need to block a view with buildings, and they can experiment with height variations and elevated viewpoints.

Then there’s multiplayer. Dead Island 2 can be explored by eight friends: a challenge previous gen consoles simply couldn’t cope with. The player-count isn’t necessarily the problem, explains Ashdown. The real problem is “making it seamless.”

While you’re playing Dead Island 2 seven other players inhabit the same world instance. They’re plucked from your friends list if they’re online or random people if not.

“You’re not necessarily aware that there are players around you. But they continue to affect the world before you run into them,” says Ashdown. “You find yourself unexpectedly playing with a stranger and then you can go your separate ways. A lot of the backend server stuff we’re doing, in the previous generation, wouldn’t be possible.”

If a stranger is in your city blowing up cars and killing zombies three streets over you’ll hear the distant sounds of explosions, but the engine is smart enough to not render the action, minimising loads on your processor, GPU and bandwidth.

“The engine has this concept of relevancy, whether or not a given object in the world is relevant to you. Only when an object becomes relevant, usually when it’s close enough, do you start receiving information.” 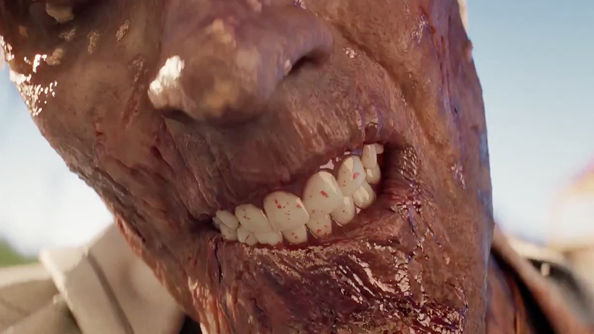 “That situation is going to be intense,” explains Ashdown. This is where the Unreal Engine can help: by optimising the world on the fly. “If everyone’s in one area we don’t need to maintain the zombie population on the other side of the map. We cull all those guys. And we make sure the challenge is equivalent and appropriate to the number of players and the level of the players. It’s not so much a case of just upping the raw numbers of zombies, we increase the level and type of the zombies.”

In this way, Dead Island 2’s world becomes the product of the each player’s perspective, unloading what they can’t experience and loading in enemies that will more effectively combat them as a group.

A lot of these enemies and the systems in the game are being controlled by Unreal Engine 4’s Blueprints system. Blueprints are essentially a scripting tool that lets you program events in your game without writing any code. At its simplest you can make a light in a room turn on when you enter by creating a blueprint connecting the light to an area trigger.

A simple interaction like that doesn’t really show how powerful the system can be.

Virtually every system of a game can be created in Unreal’s blueprints – game mechanics, AI behaviour, camera systems – and all without writing any code. For Yager it lets each member of the team take control of how Dead Island 2 plays.

“We’ve got really talented programmers, yes, but we’ve also got really talented scripters, designers, and artists,” says Ashdown. “Blueprints are powerful because it allows all those guys who don’t know C++ to get in there and implement functionality. Traditionally you do that kind of stuff as prototyping, throw it in, see how it works, tweak it a bit to work how you like and then pass it off to a programmer.

“You leave the maintenance of those systems in the hands of the designers of those systems. They can then stay with them throughout the development cycle, fixing bugs and all that stuff often without needing coders.” 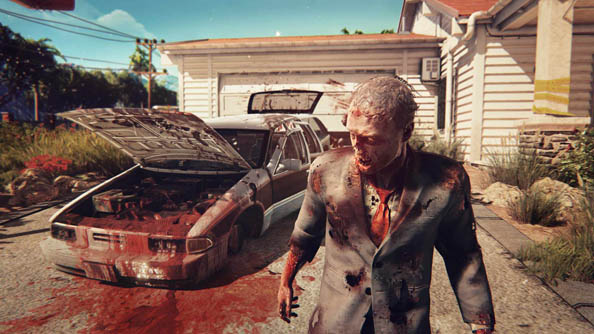 “If you’ve got something performance critical you’re going to want it run natively by the code but if you have systems which mix and match both scripting and code you can use blueprints.”

There’s an early example of Yager’s blueprint work in the Dead Island 2 demo. One quest asks you to collect 500 pieces of electronics, to be rewarded with a new weapon. The inventory was built by a programmer, but the quest design is entirely created via blueprints. The loot is dependent on the class you’re playing as. Game mechanics that used to require a game designer and programmer to work together can now be built by a single person.

What I found most telling of the power and accessibility the new tech allows is that Ashdown, Yager’s senior gameplay programmer, had had only a month’s experience with Epic’s Unreal Engine 3 before starting work on Dead Island 2. “Although I’d only worked with UE3 for a month a lot of the concepts in UE4 are the same,” he explained. “The low level architecture is similar, the networking is similar, the engine is somewhat similar. They’ve added a lot to it, a lot of new systems, but it feels like a progression.”

Dead Island 2 releases in 2015. Unreal Engine 4 development is available to anyone for $19 monthly subscription fee.

In this sponsored series, we’re looking at how game developers are taking advantage of Unreal Engine 4 to create a new generation of PC games. With thanks to Epic Games and Yager.