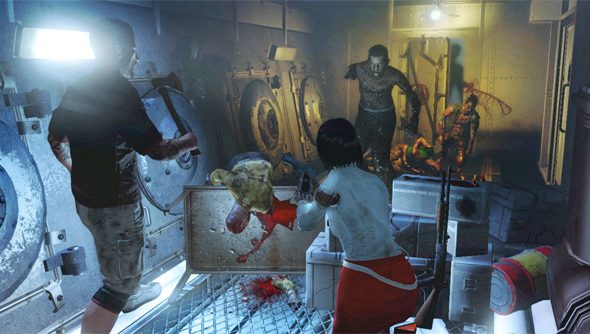 Dead Island is a game about killing undead people, lopping off their limbs and shooting them in their heads so that all their blood and brains come out. It’s developed partly in Germany, though curiously, due to the country’s restrictions on the sale of violent media, the game is not widely available in stores there. Which is obviously frustrating for Dead Island’s developers, who would probably like to show the game to their friends. Sebastian Reichert, creative producer on Dead Island: Riptide, was frank about his annoyance: “it feels [effing] awkward to have one of the most successful games in years and nobody in your country knows it”.

When asked if there were plans for a censored version of Dead Island: Riptidethat would allow it to appear on shelves in Germany, Reichert was resolute. “We have no censored version of the game,” he said, “so we cannot release it in Germany.It feels fucking awkward to have one of the most successful games in years and nobody in your country knows it.”

“There are laws that prohibit violence against human-like characters,” Reichert continued, explaining the technical reasons behind the restrictions. “It doesn’t matter what [the enemies]are, as long as they’re human-like then you have a problem. For Dead Island in particular it was a problem that you could attack the zombies when they are dead, because that’s mutilation of corpses.”
Even in the context of the open world game, corpse-fiddling in a gameeffectively triggers an automatic red flag. “We even punish the player if he does it,” explains Reichert,”because if the player tries to stab and slash everything that lies around him, his weapon will break and he’s fucked. We’re not even rewarding him, we’re punishing him for that stuff.”
But it seems not every game is under such scrutiny.Sebastian Reichert openlyquestioned the reasoning behind Gears of War 3’s apparently unimpeded release in Germany.”At the moment I’m really confused that you can buy Gears of War 3 in stores in Germany, but not Dead Island. Because where’s the difference? I mean, [the enemies in Gears of War] are human-like, and they things you do to them… ah, they really have nice finishers! That flamethrower finisher, he rams the flamethrower into the body, pulls the trigger and the flames come out of every body part. That’s in stores.”
Asked if he thinks German players are getting their hands on copies of Dead Island anyway, despite restrictions,Reichert responded, “I hope so.”

Dead Island: Riptide is due for release on April 26, 2013. Here’s their awesome announcement trailer again, which has next to nothing to do with the game at all.