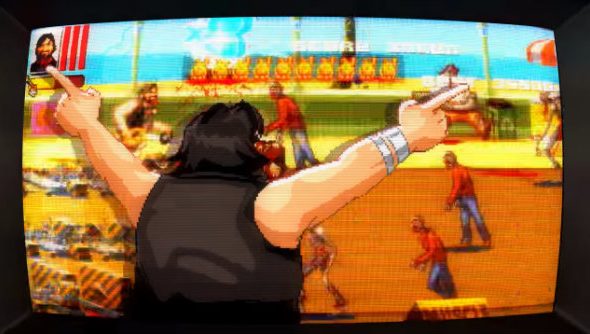 If you’ve been silently hoping for a side-scrolling, Dead Island-flavoured, retro brawler with a protagonist voiced by a bargain bin Jack Black, then today is your lucky day.

While you’re waiting for the collection, here’s our list of PC’s best zombie games.

Dead Island: Retro Revenge is a 16-bit beat ’em up where you guide a man called Max on a punchy quest through California as he tries to rescue his cat. Honestly, I’m not on drugs.

To save his feline friend, Max must combo his way through legions of the living dead, corrupt soldiers and packs of vicious ex cons. He’ll be able to collect power-ups, wield super weapons and even harness magic, because why not?

It’s one of those really wacky games that are really wacky because chicken – see, look how easy it is. We’re all wacky now! I wish I could punch it, and me, in the face.

Have a watch of the rather annoying trailer for a taste: