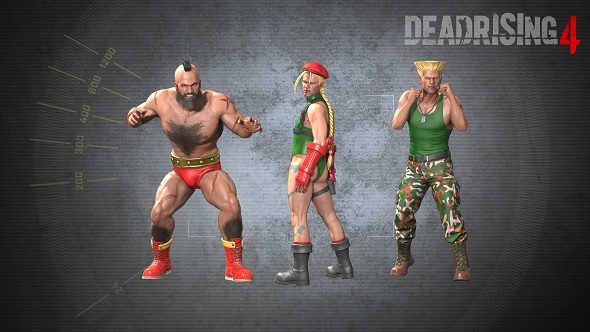 In a free update coming on January 30, Dead Rising 4 will get two new difficulty modes and some special Street Fighter costumes to spice up the zombie slaughter. Capcom have also announced that Dead Rising 4 will finally be releasing in Germany, making it the first time the series will be available in the country.

Like killing zombies? Give these other PC zombie games a look then.

The new Hard and Ultra Hard mode ratchet up the difficulty significantly, with enemies doing more damage while Frank’s weapons degrade faster and food heals less than before. There are two new Achievements also up for grabs if you complete the game on these new difficulty levels. If you are looking for your Christmas shopping trip around Willamette Mall to be more 28 Days Later than Dawn of the Dead, trying cranking the difficulty up to Ultra Hard.

The new Street Fighter costumes allow Frank to cosplay as his favourite Russian bear wrestler, with players being able to dress up as Guile, M. Bison, Zangief and even Cammy while fighting the horde. Unfortunately, you don’t gain access to any Street Fighter moves when wearing these costumes, but you do get to sport Zangief’s luscious chest hair and Guile’s gravity defying flat top. You have to wait for eventual Dead Rising 4 mods if you want to Sonic Boom or Cannon Spike through the undead.

German Dead Rising fans will be able to purchase the game from the Microsoft Store on January 31, so you will not have to wait long to finally get your hands on this series. The release of Dead Rising 4 could also mean that the previous titles will soon be cleared for German certification, so fans can finally play through the whole series.