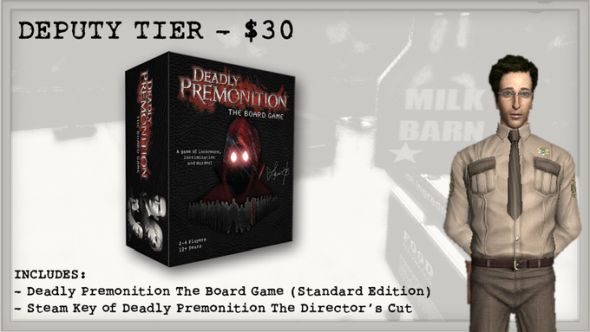 Deadly Premonition: The Board Game has smashed its $50,000 funding target in just over eight hours. Now the goal has been reached, the team is promising to deliver even more with this project.

Stealth games your thing? You’ve come to the right place.

Hardcore fans of the video game were able to fund the tabletop version in eight hours. As of now, they’ve doubled the funding target and the game looks to deliver all of its promises and more.

The two-to-four player game will explore the world of Deadly Premonition as players work to identify a killer in the town of Greenvale. Involving stealth and sabotage, the game is heavily inspired by the twists and turns of its digital counterpart.

As of the latest update, the team at Rising Star Games has reached their fourth stretch goal bringing four new actions cards and two new weather cards into the mix. Expect more stretch goals to be announced soon.

The team has also promised to increase the production count. This will ensure that things like the Chief Sheriff tier, which sold out on the first day, are available. Not only this, but some mysterious extras are in store for the Special Edition.

With fans so eager to see the finished product, Rising Star are starting to print the prototype version, with more information to be available in the coming updates. The aim is to ship the fully-realised game by the end of 2017.