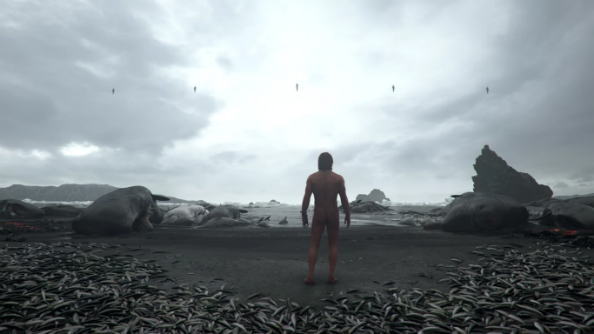 It’s late May 2016. CG studios the world over are working extra hours to fulfil meticulous briefs handed to them by the world’s biggest game developers and publishers. They’re preparing for E3, when company heads will introduce their trailers to millions of eyes across the world, after which everyone will get busy articulating their reactions on social media. Are the shoulder pads big enough?, They worry. Can we make those explosions explode a bit more? We don’t want that other franchise’s explosions to explode more than ours. Let’s linger on that returning character for a touch longer there. We’ll win E3 if we do that.

Meanwhile, Hideo Kojima casts an eye over the final frames of his own trailer, observing a beach full of fish and whales with umbilical cords, a naked Norman Reedus standing before them. Cocking his head back and placing both hands theatrically on his belly, he laughs. He laughs and laughs.

Death Stranding’s trailer, shown at Sony’s E3 conference, couldn’t be more different to its contemporaries at the big publishers’ shows. Announcements generally do well at games conferences by a) attaching themselves to a beloved franchise name, ideally one dormant for at least ten years, b) showing an extended passage of in-engine footage featuring higher fidelity graphics than everyone else’s games, and c) announcing a surprising release date. See Sony’s 2015 conference, Ubisoft’s new IP reveals, and Fallout 4’s announcement for fine examples of a, b, and c, respectively.

Death Stranding does the opposite of that.

The name itself is wilfully unmarketable, enigmatic to the point of obtuse or mis-translated. The trailer features zero gameplay, because there is no game yet. Kojima has yet to begin production, or even choose an engine on which to build the game. All of that means we’re unlikely to play Death Stranding, or even hear from it again, for years.

And It doesn’t matter – it’s my favourite ‘game’ of the show. People are analysing it frame-by-frame for clues that might unlock its symbolism and enigma, and spilling over with excitement for it on social media. In other words, Hideo Kojima generated the sort of buzz for his game that everyone hopes for when they take the stage, by doing the exact opposite of what you’re supposed to do at E3. 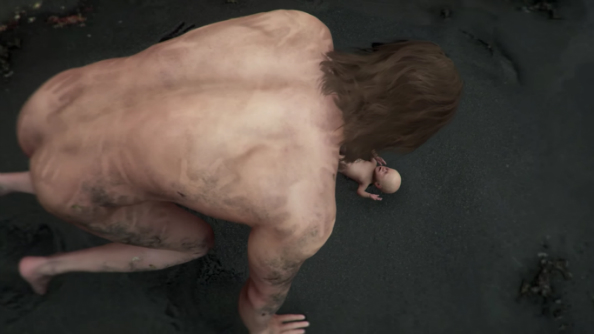 Certain elements seem deliberately subversive. Male nudity, for example, is a strikingly unusual sight at a conference better known for exoskeletons and sci-fi space suits. The deliberate absence of action and dialogue too, that runs against the grain of how things are done at the Los Angeles Convention Center.

Other aspects of Death Stranding’s iconography and visual metaphor seem present to inflame the Kojima fanatic’s imagination, and they only succeed because of the gravity of the creator’s name. He’s our Steven Spielberg – few game makers can command such frame-by-frame attention and analysis.

He has priors in the art of misdirection, of course. Kojima announced a new Metal Gear Solid game in 2012 by debuting what would turn out to be in-game footage at the Video Game Awards under a fake name (Joakim Mogren, an anagram fans quickly solved) heading up a fake studio (Moby Dick Studios). The unusual lines around its working title, The Phantom Pain, sparked online sleuthing that quickly discovered the words ‘Metal Gear Solid’ fit perfectly within them.

Then there was the ‘interview’ with Joakim Mogren, an actor in a face bandage and a barely passable Swedish accent. It’s one of the strangest things you could hope to see at a game’s reveal. Only Kojima – and Valve, when all’s said and done – can bury easter eggs that complex and rely on their fervent following to decipher them.

Gamescom 2014 saw Kojima indulge his flair for mystical reveals once more, when he announced onstage that the PS4 demo P.T., which went live that day, was in fact a Playable Teaser for his new announcemnt: Silent Hills. Starring Norman Reedus. 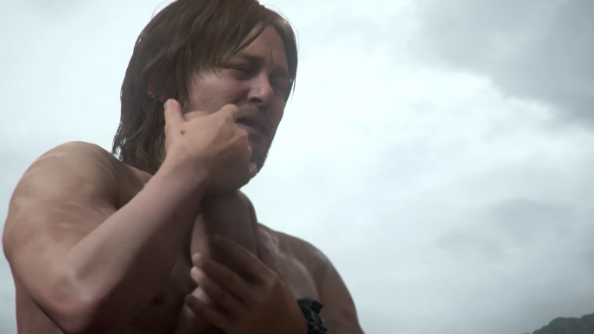 Reedus’ subsequent appearance in Death Stranding cements the Walking Dead actor’s place as a mascot for Kojima’s mysterious game reveals. There’s much for the fanatics and web-sleuths to pore over: mathematical formulas on Reedus’s necklace which related to black holes and inter-dimension travel, more unusual lettering with umbilical cords protruding from it, the appearance of something buried underground at the exact moment the lyrics “buried underground” are heard in the soundtrack… to name a few oddities.

The sense of event that Kojima manages to summon with these reveals is special, but that isn’t the reason Death Stranding really resonates with me. To me, that trailer quietly holds up the increasingly prevalent practice of carefully strategised, soulless and passionless games marketing in playful ridicule.

There’s nothing focus grouped about Death Stranding. Nothing about it has been decided in a boardroom. This is – almost aggressively – one man’s vision. A man who’s worked for decades to gain the trust of money men to indulge that vision. Retrospectively villified E3 showings like Watch Dogs lost face for the disparity between their ‘target footage’ fidelity and the final product, but the cold, clinical, homogenised approach to game design evident to some extent across all the big publishers’ conference rosters is just as worrying.

Death Stranding is the antidote. It’s the game all creators wish they could convince their financiers to let them make, and it made it onto the biggest stage in videogames. What the game that eventually appears will look or play like, or even what it’ll be called – none of that seems to matter. Kojima sent a powerful message with this trailer, and it’s a message aimed just as much towards developers as gamers.