It’s an inevitability that where one indie trailblazer goes, others will follow. It’s hard to argue that Red Hook’s intensely tactical RPG Darkest Dungeon wasn’t a masterwork now – a compelling blend of Wizardry-era RPG combat, modern dungeon crawling and a long-term management spin that had you weighing up the value of every party member’s lives.

Prefer your card combat to stand on it’s own, rather than attached to a dungeon crawl? Well, you’ve got plenty more games to pick from on PC.

The story behind Deep Sky Derelict’s genesis is a little unusual, considering its obvious inspirations. Rather than crowdfunding, developers Snowhound Games pitched the game at SLUSH, a Helsinki-based meetup for start-ups and their potential investors. Even in its earliest concept phases, it caught the eye of an investor, and between that, a government startup grant and a publishing deal with Russian giant 1C, here we are now.

It’s a solid reminder that as people lose faith in Kickstarter (despite it resulting in some stunning games the past few years, including our potential GOTY, Divinity: Original Sin 2), we’re likely to see more stories like this – of smaller studios requiring multiple third-party funding streams in order to realise their dreams. The indie bubble may not have burst quite yet, but it’s starting to deflate a little. 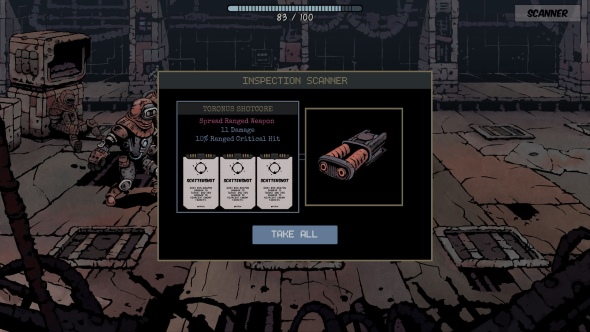 Business aside, the game is immediately familiar and recognisable stuff, right down to the ‘stripping the land bare for funding while under attack from otherworldly horrors’. Just replace the lovecraftian fantasy with… vaguely lovecraftian sci-fi, I guess. The Mignola-inspired art is present and correct, and given additional focus in the comic panel-style combat art.

Darkest Dungeon’s map also returns, somewhat expanded and more detailed, designed to let you explore derelict spacecraft a little more readily. What looks like the biggest divergence from the formula is the combat engine. As in the excellent Card Hunter, your options in any given turn are chosen from a hand drawn from a pool of cards generated each character’s equipment. It means that your choice of equipment is immediately more interesting than just a 1+ stat upgrade. If you piece of gear your want doesn’t have the cards you need to synergise with your existing picks, it may not be worth equipping, even if it gives a direct statistical upgrade.

Things are hectic right now, but we hope to take a deeper look at the game sometime in the not too distant future. If you can’t wait, Deep Sky Derelicts is available in early access now, and you can pick it up from either Steam or GOG for £12.39/$16, with the full game scheduled for release sometime in the first quarter of 2018.