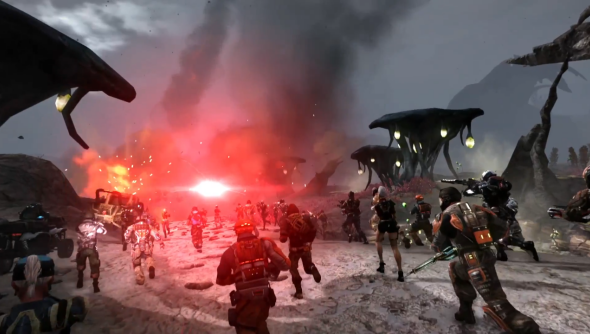 Open world MMO shooter Defiance has gathered over a million registered accounts since its launch last month. Developer Trion has celebrated by revealing the most popular activities in the game, and launching a contest for players to be featured on the accompanying TV show.

Predictably, killing things is at the number one spot in popular tourist activities in the terra-formed Bay Area, with players having killed more than 500 million hellbugs this month. Second most-performed-action around Defiance is cruising on an ATV, with gamers clocking up 50 million miles. In at third place is working as a team and battling Arkfalls, with a million having been triggered.

If you’re a player of Defiance and you’ve quite had enough of killing bugs and driving cars for this month, you can enter the ‘Most Wanted’ contest, in which you can fight to the death in exchange for an appearance in an upcoming episode of the Syfy channel show. Entry closes on May 12th, and you can register for the contest at the official website.