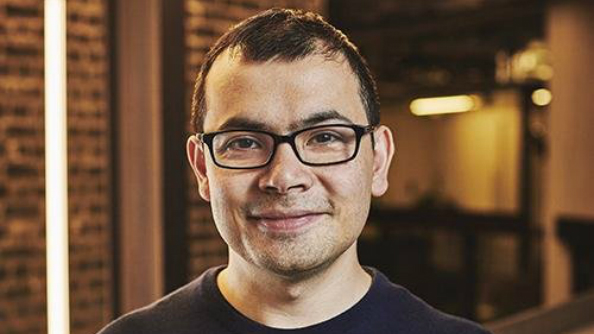 “One day I dream of coming back and making the ultimate game with some learning AI in it,” says Demis Hassabis, once a 15-year-old Bullfrog employee designing AI for Populous II, now founder of artificial general intelligence project Google DeepMind, whose AlphaGo AI beat 18-time world Go champion Lee Sedol in March 2016. “But I don’t know if there’s enough time in life.”

Read more: Hassabis and Bullfrog laid the foundations for these brilliant strategy games from the modern era – check them out if you like forethought and spreadsheets.

It’d be nothing less than true to form if he did. Hassabis has spent his adult life – and much of his adolescent life, too – completely immersed in artificial intelligence research. Sometimes it’s taken him in the direction of videogame design. At others, it’s pulled him towards academia and scientific research. Whichever proved the most interesting route at the time – but the goal has always been singular.

“Although I was making games at Bullfrog, Lionhead and Elixir,” he says, “my aim was always to eventually focus on AI. Games were my way into that.”

Not that they suffered at all for being a by-product of Hassabis’ research. His list of credits, which includes Syndicate, Theme Park, Black & White, Republic: The Revolution and Evil Genius, all benefitted from a design approach that placed AI front and centre. They made a compelling feature out of an element other titles at the time struggled to even find a functioning system in. 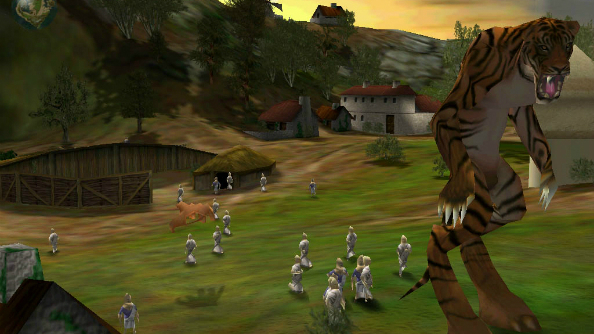 Black & White provides the most salient example: a god game about teaching an anthropomorphised creature to do your bidding, whether that means slapping around a bipedal horse to galvanise its dark side, or guiding an adolescent mandrill around by a rainbow-coloured leash and showing him how to distribute grain. A game about learning AI, released in 2001, with little in the way of modern counterparts.

The games Hassabis worked on feel like great big cauldrons of ideas, bubbling to the point of boiling over, if you play them in 2016. They’re indicative of a very different rationale than exists today, a mindset from a decade which Hassabis characterises as something of a paradise for UK game development.

“The most fun I had in games was early in my career in the 90s. Especially at Bullfrog, I was lucky to be there at the most golden period it had. Maybe that has ever existed in the UK industry, if you look at the games it produced one after the other.” 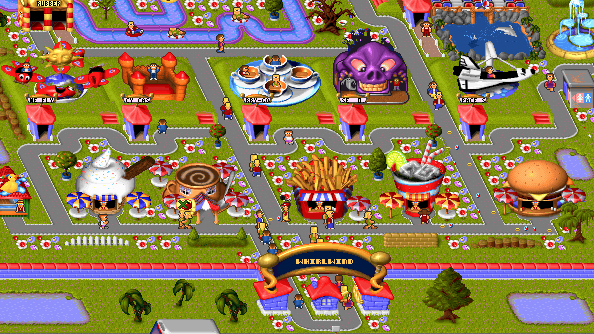 Peter Molyneux hired Hassabis before he even finished school, so the received wisdom from this era at Bullfrog is that he was the co-founder’s protégé. In fact, it was a two-way street. “I think we influenced each other a lot,” he says. “We worked together very closely for a number of years – it’s hard to say who [influenced who] more but it was a very important part of my life.”

The pair would find themselves exploring possible applications of AI outside their current projects. “We discussed what the future might look like if you really extended this kind of work, how could you build true AI. A lot of the ideas were quite interesting, although some of them were quite naive now that I know more about the topic.”

Bullfrog and Lionhead built their games around AI, so when Hassabis formed Elixir Studios in 1998 he took all that he’d learned and been allowed to experiment with in the company of Molyneux et al and built upon it. First came Republic: The Revolution in 2003, a complex political sim with an equally complex graphics engine, to be followed by 2004’s Evil Genius, a Bond pastiche-meets-Dungeon Keeper whose visuals still hold up in 2016.

When Elixir shut down in 2005, it followed the cancellation of an unannounced project that had been in development for two years a “perceived high risk” from publishers. Two years of the studio’s work, never to see the light of day. Hassabis released the following statement:

“It seems that today’s games industry no longer has room for small independent developers wanting to work on innovative and original ideas. … This was the sole purpose of setting up Elixir and something we could never compromise on.” 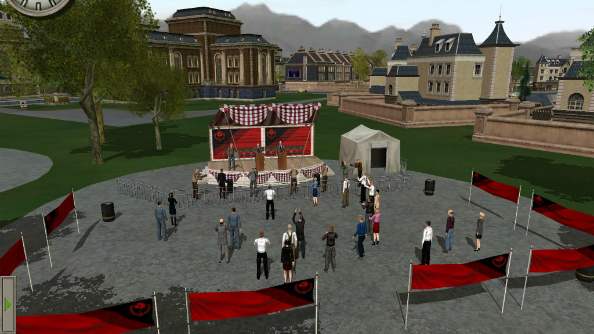 The industry had changed. The atmosphere of creativity and experimentation had given way to a much more cautious approach; the beginning of the industry’s obsession with iterating established IPs; the twilight of big-budget curiosities like Black & White.

But it wasn’t just the increasingly chilly feet of the money men that persuaded Hassabis away from games and back to scientific research. The accelerated pace of development on the technology side of PC gaming through the nineties, paired with the level of freedom afforded to developers, had created a bubble Hassabis found irresistible.

“At the time, 20 years ago – another lifetime ago – games were at the forefront of a lot of cutting edge research,” he says. “Graphics, AI, even hardware. GPUs were invented for games, right? I remember back in the early 90s, when we were on Pentiums or 486, people would always ask: why do we need any more computer power? Because we can already run our processors and spreadsheets. Games were for a long time, nearly a decade, one of the main answers to that question.

“It was this whole feeling in the 90s that went away I think in the 2000s when games started becoming massive projects – you needed 60 people, it would take three or four years and these huge amount of money and efforts. There becomes less time and room for experimentation, and publishers become more conservative because there’s more money on the line.”

Hassabis watched the cultural shift happening around his Elixir studio in the ’00s until he reached an impasse: “I can’t get any interesting AI research done, whilst under the guise of a game.”

Hassabis alternated his pursuit of that research in the worlds of academia and videogames since childhood, studying the computer science tripos and obtaining a double first from Cambridge in between genre-defining Bullfrog titles. But after Elixir closed its doors for the last time, Hassabis wouldn’t return to the industry. 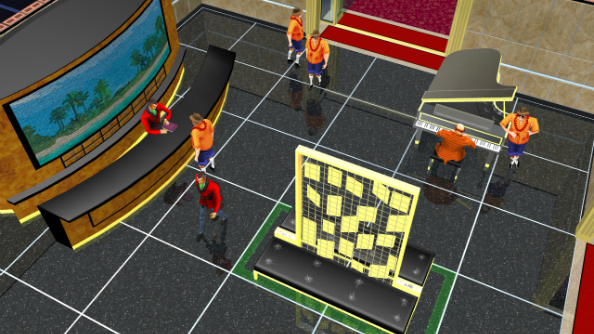 It was a departure that led him, via what he describes as “a side sojourn into neuroscience”, to the creation of DeepMind. A set of complex general-purpose learning algorithms culminating in an AI ‘agent’, it learned the game of Go well enough to beat formidable multiple world champion Lee Sedol. And its applications extend further than Go, or perfect information games, or games as a whole: it can use what it learned about Go and apply it to just about any task.

“That was my cross-over point,” says Hassabis, “doing a PhD in neuroscience after I had finished off with Elixir and we’d sold off all the IP and the tech. I went back to a PhD at UCL [University College London] on imagination and memory. I was really discovering how the brain does those things.”

The fascinating thing about those topics, Hassabis says, is not just in discovering how our minds perform those tasks, but the fact they’re also missing from AI.

“At the time, we had no idea how to do things like imagination and episodic memory in a machine learning system, and now after five or six years into DeepMind we’re finally able to tackle those really fundamental questions. Things like memory and imagination. So again there, all that neuroscience is feeding into the inspirations for algorithmic ideas here – I always use every scrap of experience I have for what I’m doing at the moment.”

What he’s doing at the moment is applying DeepMind to problems beyond games. Big problems, primarily in science and medicine, ones that have so far remained beyond the grasp of human head-scratching. Google demonstrated their confidence that DeepMind would eventually solve those problems when they bought Hassabis’ company for a reported $600 million in January 2014. 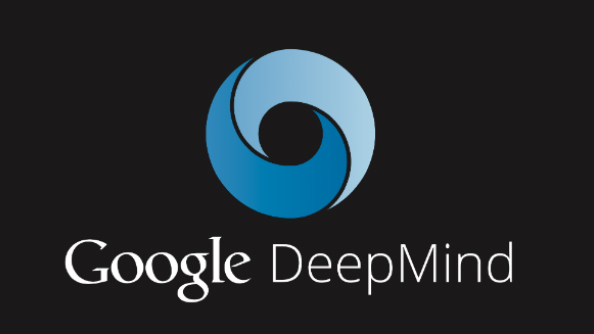 Some might suggest an information-based giant such as Google also sees other valuable applications for an artificial general intelligence agent in the age of attention economy. A not-insignificant proportion of AI research today trains its sights on improving information technology’s potential as an advertising platform.

In fact,Forbes reports that one of DeepMind’s conditions in the Google buyout was that an AI ethics board be established. In the absence of further information about that board, a sense of mystery has gathered (What are they so worried about? Are Google building Skynet? Have they already built Skynet? ad nauseum). Speculation aside, DeepMind are serious about applying their AI in beneficial ways.

“Games are just our development platform,” he says. “It’s the fastest way to develop these AI algorithms and test them, but ultimately we want to use them so they apply to real-world problems and have a huge impact on things like healthcare and science. The whole point is that it’s general AI – it’s learning how to do things [based on] its own experience and its own data.” 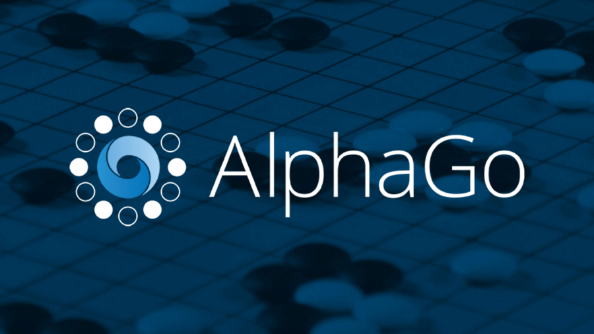 So if you were hoping that AlphaGo, an AI that beat a human player at a game with more possible moves than there are atoms in the universe, was a precursor to Hassabis returning to the games industry with a revolutionary strategy game to show, it’s time to start thinking bigger.

Perfect information games are a proof-of-concept for DeepMind’s learning algorithms. DeepMind itself is all about building AI using the human brain as a blueprint, so when AlphaGo beat Lee Sedol it did so without peeking at the Go cheat sheet, unlike IBM’s Deep Blue when it bested chess grandmaster Garry Kasparov.

“The difference between AlphaGo and Deep Blue is that Deep Blue was programmed directly with knowledge about chess, whereas AlphaGo was programmed with the ability to learn that knowledge, which is much more powerful in our opinion because in theory it could learn some new domain if you gave it different data – that’s what we’re currently exploring now. The next stage is: can we now use that in other real-world domains and do these really cool things that will benefit the world? That’s the two-pronged attack, really.”

Despite his significant standing as a games industry alumnus and even greater standing in science and technology, Demis Hassabis doesn’t have an ounce of the pompousness that a well-regarded creative director might allow themselves after a few hits. He chats about inherently complex and far-reaching topics in the same friendly, matter-of-fact way he reminisces about Bullfrog.

“I’ve such fond memories of it,” he tells me. “The games industry is where my heart started, I still follow all this stuff.”